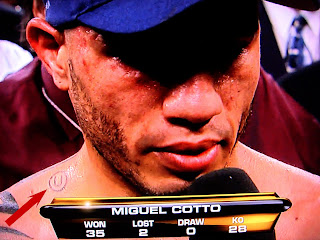 The Jewish boxer Yuri Foreman, who is originally from Haifa Israel and training to become an Orthodox rabbi, just lost in a TKO decision to the Puerto Rican fighter Miguel Cotto at Yankee Stadium.

While I was disappointed that Foreman lost his title, I thought it was funny that at the end of the fight while Cotto was being interviewed by an HBO reporter, it became apparent that he was sporting a tattoo on his right collarbone that looks like the kosher symbol of the Orthodox Union (OU).

As I posted on Twitter:
Yuri Foreman keeps kosher and apparently Miguel Cotto IS kosher. You’d think the OU would advertise with the Jew. 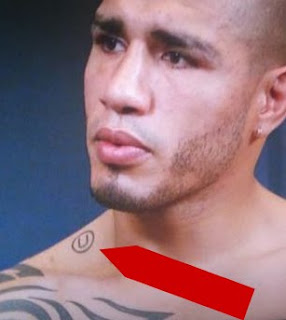 Update: Miguel Cotto got the tattoo as a gesture for a Jewish friend of his. Here’s the background story on Cotto’s kosher tattoo with video below courtesy of Elie Seckbach: