I’m surprised this hasn’t gotten more attention, but on the Tablet Magazine website (a project of Nextbook) basketball fans are able to create their own starting lineup among the best Jewish-American Basketball players of all time. Tablet teamed up with FreeDarko, “the amazing five-year-old collective of basketball writers known for its wit, one-of-a-kind drawings, and revealing focus on unorthodox statistics, to let you select your top all-time Jewish-American starting five, plus a Jewish coach.”

I’m glad I didn’t have to choose a Jewish American team owner because that would be a difficult choice with so many to choose from (Bill Davidson of blessed memory left a legacy of philanthropy here in Detroit, the Cavaliers’ Dan Gilbert’s a great guy and a smart businessman, the late Wizards’ owner Abe Polin was a mensch; and then there’s also Bruce Ratner of the Nets, Jerry Reinsdorf of the Bulls, and even Starbucks CEO Howard Schultz owned the Supersonics at one time).

My selections are listed below, but I’ll offer some background on my choices (note that there are only three options for each position). I chose Red Auerbach as coach. He was definitely the greatest of all time. It’s interesting that of the three Jewish American coaches listed, two are named “Red.” Being from Detroit, I might have picked Larry Brown or Ron Rothstein, but they weren’t listed in this category. Larry Brown was an option for Point Guard, but I went with current player Jordan Farmar. 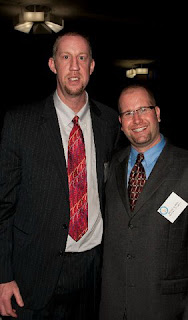 For Shooting Guard, I went with Max Zaslofsky simply because you can’t even make up a more Jewish name than that (and I never heard of the other guys). At the Small Forward spot I didn’t recognize any of the players so I went with Jack Molinas since I know a rabbi with a name that sounds similar (Rabbi Jack Moline). I almost went with Art Heyman because my high school English teacher was Art Heymoss freshman year.

At Center I went with Neal Walk because of the mustache. I would love to go with Nate Huffman (pictured with me) who Wikipedia lists as a Jewish player, but I learned a few months ago that he isn’t actually Jewish. Since the Michigan Jewish Sports Foundation wasn’t able to induct him in the Michigan Jewish Sports Hall of Fame, it presented him with the Tree of Life Award. I think any award with the word “tree” in it is a fitting tribute to a guy who is 7’1″. Huffman’s from Michigan and played for Maccabi Tel Aviv. He signed as a free agent with the LA Clippers but never played with them.

Finally, for Power Forward I was going with Dolph Schayes, but I couldn’t resist selecting Amare Stoudemire since his questionable Jewishness has been so widely discussed lately. By the way, if Dolph Schayes’ son Danny was an option at Center, I might have gone with him. And former Detroit Pistons Center Earl Cureton probably could have been included even though he’s not Jewish since he works out at the Jewish Community Center of Metropolitan Detroit more than any Jewish person I know. 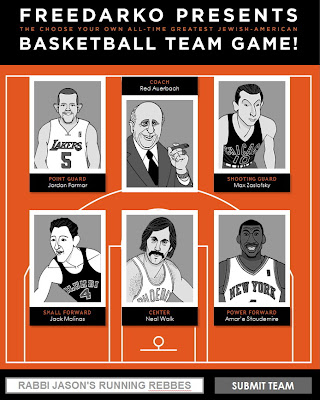