Skip to the content
In Memory of Debbie Friedman (1952-2011)
Debbie Friedman’s music is so fully integrated into synagogue liturgy,
that in many congregations it is considered “traditional.” 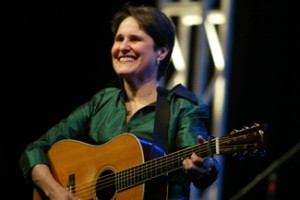 I don’t remember the Jewish Theological Seminary in the late 90’s as a very spiritual place. I began rabbinical school in 1998 and there was a general consensus that the Seminary was lacking ruach (spiritual energy).

I do, however, remember a day when, for a few hours, the Women’s League Seminary Synagogue was transcended into the most ruach-filled place I ever experienced. Before classes officially commenced again following winter recess, the rabbinical school had a mandatory “mini-mester.” One year, the theme was on spirituality in prayer.

To conclude the mini-mester, the popular Jewish singer and songwriter Debbie Friedman came to the Seminary to lead a healing service. Her energy electrified the Seminary’s synagogue where students, faculty and guests were singing and dancing. I remember thinking that if I could bottle up her ruach and sell it to congregations around the globe, I’d be a billionaire. Her music adds so much life and feeling to our liturgy.

Debbie Friedman’s version of the Mi Sheberach (prayer for healing) has inspired Jews all over the world to make a communal prayer for healing a staple of every Shabbat service. Her “Alef-Bet” song is how my three children learned the Hebrew Alphabet. So many brides have walked down the aisle or circled their grooms to Debbie Friedman’s “Lechi Lach.” “Miriam’s Song” has become the theme song at every gathering of Jewish women, especially at the yearly Passover seders for women that Debbie Friedman led in New York. And hundreds of thousands of current and former Jewish campers only know Debbie Friedman’s version of havdallah, the prayers ending the Jewish sabbath.

Debbie Friedman died today in an Orange County, California hospital after being hospitalized for pneumonia. She spent Shabbat in a medically induced coma. She had battled health problems in the past, which likely led to her dedicating much of her career to healing services and soulful prayers for the ill.

Ann Coppel’s award winning documentary about Debbie Friedman, “A Journey of Spirit,” gave her fans an inside perspective of her life and health battles. According to the “A Journey of Spirit” website, “For children and adults alike, Debbie Friedman’s music is living Judaism. With her honest, pure voice as their guide, a whole generation of Jews has come to embrace the liturgy through her melodies. Here they find relevance and meaning in the words of the prophets, the messages of ancient rabbis, and the sacred texts of the Jewish religion. In her 30+ year career, Debbie Friedman has recorded 19 albums. She was influenced by American popular music of the 1960’s and 70’s… Now she is influencing younger singers and songwriters with her own dynamic style.”

May the memory of Debbie Friedman be for spiritual blessings always.