Some sports teams have Native American nicknames that many find to be offensive. Teams like the Chicago Blackhawks, Kansas City Chiefs, Washington Redskins, Atlanta Braves, Cleveland Indians, Cincinnati Reds, and Golden State Warriors have chosen to keep their names despite protests from the Native American community. 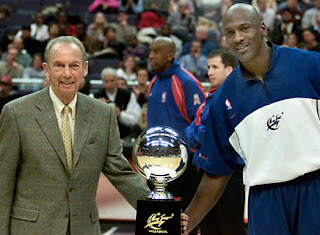 The recent suspension of two Washington Wizards players brings to mind the changing of sports teams’ nicknames. Wizards’ guard Gilbert Arenas and his teammate Javaris Crittenton were suspended for the remainder of the season by NBA commissioner David Stern after Arenas admitted that he brought four guns into the locker room following a heated argument with Crittenton during a card game on the team plane.

The owner of the Washington Wizards, the late Abe Pollin, changed the name of his NBA franchise from the Bullets to the Wizards in 1995 after flying back to the Washington D.C. area following the funeral of his friend, Prime Minister Yitzhak Rabin in Israel.

In the November 12, 2005 edition of the New York Times, columnist George Vecsey wrote:

Abe Pollin decided months ago that it was wrong to call his Washington basketball team the Bullets. He pushed up the announcement the other day after flying back from the funeral of a friend, a hero, who had been killed by bullets.

“I stood in the spot when Rabin was killed,” Pollin said the other day.

Yitzhak Rabin, the Prime Minister of Israel, was assassinated a week ago Saturday in Tel Aviv. His life was no more precious than the lives of children killed by flying bullets as they cower in apartments in the District of Columbia, or teen-agers gunned down in the heat of an argument. Yitzhak Rabin’s death reinforced Abe Pollin’s belief that something must be done about the nickname.

“I’ve thought about it for 31 years,” Pollin said the other day, after announcing that a new nickname will be chosen by the fall of 1997, when the team moves to a new arena in the national capital.

“Bullets connote killing, violence, death,” Pollin said. “Our slogan used to be, ‘Faster than a speeding bullet.’ That is no longer appropriate.”

So, it is ironic that fourteen years after Pollin decided to change the name of his basketball team because it connoted killing and violence, the team’s star player is arrested for bringing four guns into the locker room.

Charles Krauthammer discussed the issue at length on This Week in Washington. He said:

“In a sense, you’re almost grateful that he died before he could see this. He’s a man who changed the name of the team, the Bullets, which had a long and distinguished history, simply because it gave the wrong message. And he did it, and he probably lost a lot of money doing it, but it meant a lot to him. And to have a member of his team in a gun issue in the Verizon Center, which he built, would have broken his heart.”

Dan Steinberg, in his D.C. Sports Blog, explains that, following Abe Pollin’s death and “Gilbert’s Great Gun Goof,” there have been several explanations for why Pollin changed the name of the team from the Bullets. 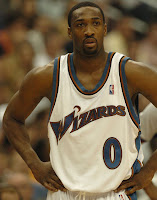 The Wizards referenced the name change in their press release about the Arenas suspension, saying: “It is widely known that Mr. Pollin took the extraordinary step of changing the team name from ‘Bullets’ to ‘Wizards’ in 1997 precisely to express his abhorrence of gun violence in our community” Most likely, it was the rampant gun violence in D.C. that convinced Pollin to change the name, but then Yitzhak Rabin’s assassination that gave a greater sense of urgency to the decision.

I don’t believe that changing a sports team’s name will have an effect on how successfully the team performs in the future. However, there is a tradition in Judaism that name changes have the ability to transform. When a Jewish person is on their deathbed, there is a custom of changing their Hebrew name to ward off (and confuse) the angel of death.

In the Torah, several characters have their names changed by God. The first Hebrews Abram and Sarai become “Abraham” and “Sarah” as they progress into the first parents of the Jewish people. Joshua was known as “Hoshea the son of Nun,” but then Moses changed his name to Joshua. The greatest transformation resulting from a name change in the Torah was following Jacob’s struggle with an angel of God when it was declared that he would henceforth be known as “Israel.”

Abe Pollin’s decision to change his pro basketball team’s name from the Bullets was a wise one. Bullets do connote violence and killing, and no sports team (especially one in a town known for gun violence) wants that association. It would be wise for the teams that use American Indian nicknames or mascots to change their names as well. If a pro sports team or a university team has a nickname that offends such a large community of people, why continue that tradition?

Sports teams should use nicknames for which their fans can be proud. In Detroit, our basketball team has been called the Pistons because of the pride the Motor City feels for the auto industry. But now that the auto industry in Detroit has fallen on hard times and there are rumors that the team may soon be for sale, a new name may be in order.

It might be a good idea for Gilbert Arenas to take after the biblical Jacob and select a new name for himself. Just as Abe Pollin honored the memory of his friend Yitzhak Rabin by changing his team’s name, Arenas would be honoring Abe Pollin’s memory by his own transformation.