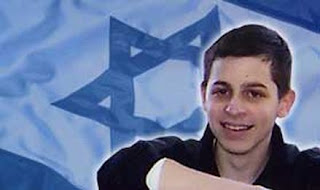 My evening began at a screening of the documentary film “Family in Captivity” about the Shalit family’s campaign to pressure the Israeli government to be more aggressive in demanding their son’s release from Hamas terrorists. Israel Defense Forces soldier Gilad Shalit has been held in captivity for over three years after being abducted through the Kerem Shalom crossing in Israel.

The film is a gripping tale of a very low-key family, that runs a bed and breakfast in the beautiful Western Galilee settlement of Mitzpe Hila. I found the hour-long film difficult to watch at times. Even before becoming a father I struggled to watch movies in which children are kidnapped (e.g. Ransom). Now that I’m a father, I make it a point to avoid such movies. I made an exception for this documentary because the issue is so dire. Watching the film, I realized how important it is that people all over the world unite in demanding Gilad Shalit’s return from captivity.

The most distressing part of the film for me was the scene in which Gilad Shalit’s father, Noam, met with former United States President Jimmy Carter. I don’t often criticize U.S. presidents. In fact, I believe in the importance of showing respect to our nation’s presidents and yet I cannot refrain from expressing the angst I felt watching the way Jimmy Carter communicated with Noam Shalit. And I wasn’t alone. The entire theater booed after listening to Jimmy Carter speak with utter disrespect to a man fighting for his kidnapped son’s safe release.

Noam Shalit asks Carter if he was able to deliver his letter to his son’s captors. Chewing gum throughout the entire conversation, Carter doesn’t seem to have any empathy for Mr. Shalit. Carter can only describe the devastation he saw in Gaza. In a very self-aggrandizing way, he tells Gilad’s father that Hamas would only accept the letter from him. The former president comes off horribly in the film. Before seeing the film, I read an article in which Noam Shalit says that the fact that Carter is not considered pro-Israel could be beneficial in securing his son’s release.

I’m wondering how many Jewish people who accepted Carter’s recent apology for his anti-Israel rhetoric will see this film and have second thoughts about how genuine Carter’s apology was. In fact, many believe that the apology only came about because his grandson, Jason Carter, is considering a run for state senate, although Carter has denied a hidden agenda.

From the film, I headed over to a synagogue for the annual inter-congregational Men’s Club dinner. The speaker was Oakland County’s sheriff, Michael Bouchard. I thought the fact that Bouchard, a republican, recently declared himself a candidate for Michigan governor made him an odd choice for this non-political event. The sheriff spoke about his recent trip to Israel and the lessons he learned from the Israeli police. His speech centered on how Islamic terrorism must be curtailed. It was a speech one would expect a candidate for governor to deliver to a couple hundred Jewish men in an area that has the largest Arab population outside the Middle East. 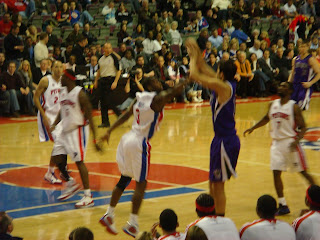 I left the Men’s Club dinner and headed out to The Palace of Auburn Hills to watch the Detroit Pistons host the NBA’s first Israeli player. I actually cannot think of another major professional sport that has had an Israeli player. Omri Casspi came to Detroit for the first time and, like other NBA cities with Jewish communities, there was a large contingent of Israelis and Jewish fans in the audience to welcome him.  Casspi is having a great rookie season for the Sacramento Kings.  It was fun watching the fans waving large Israeli flags, which made it on to the jumbo video screens (“Palace Vision”) often throughout the game. I don’t remember the last time so many local fans cheered when an opposing player scored.  The only downside was that the Pistons lost a hard fought game. I must admit that it was odd to watch an opposing player hit a three pointer over my favorite player (Rodney Stuckey) and I actually cheered (see photo).

A few days before his Detroit visit, Casspi scored 18 points against the New York Knicks at Madison Square Garden’s Jewish Heritage Night.  His welcome to NBA cities by Jewish fans has been great and that energy and excitement has been covered throughout the media including in the NY Times.

Here’s hoping Gilad Shalit will be released from captivity soon and be able to watch his fellow Israeli, Omri Casspi, play in an NBA game.