It was recently announced that President Barack Obama will speak at the University of Michigan  commencement this Spring in Ann Arbor. As a Michigan State alum, I hope Obama’s theme is environmentalism and that he finishes his graduation speech with the words: “In conclusion, GO GREEN!!!” 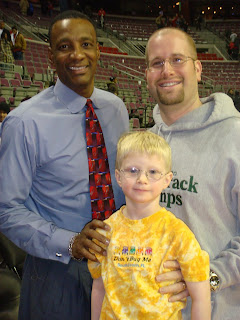 When I graduated MSU in 1998, the commencement speaker was former NBA basketball player Greg Kelser (in photo), who now is a TV commentator alongside George Blaha for the Detroit Pistons. As a senior at Michigan State, Kelser along with Ervin “Magic” Johnson led the Spartans to the 1979 NCAA tournament championship, the first in the school’s history. The year after I graduated, Elie Wiesel addressed Michigan State’s graduating class.

Two years earlier, in 1996, I heard a wonderful commencement address at my wife’s graduation from MSU when White House press correspondent Helen Thomas spoke. The best commencement speech I ever heard at MSU was in the Spring following my freshman year in 1995 when President Bill Clinton delivered the address. I also enjoyed listening to the late NY Times columnist William Safire at my Jewish Theological Seminary commencement in 2004, a memory I blogged about following Mr. Safire’s death this past September.

Perhaps no commencement address, however, compares to Conan O’Brien’s commencement speech to the Havard Class of 2000.