I was surprised by how much I enjoyed James Cameron’s film “Avatar.” It is unusual for me to enjoy a fantasy movie so much that I have to see it a second time in the theater, but this was the case with this 3-D film about a futuristic planet (Pandora), inhabited by an indigenous population that is destroyed by a human army in its effort to mine a precious mineral called “unobtanium.”

Knowing that the local tribe on Pandora is called the Na’vi, the Hebrew word for prophet, I went into the theater listening closely for other Jewish references or connections. And I found several. 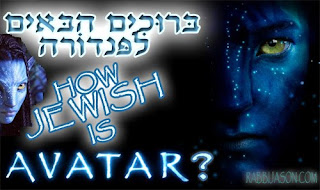 There have been some very interesting articles about the Jewish connections in Avatar. Never one to disappoint with his scholarly understanding of theology and theodicy, Jay Michaelson penned two separate articles about Cameron’s Avatar. In his Huffington Post essay, the author of “Everything is God” explains the theological underpinnings in the film. He writes, “Avatar’s Na’vi subscribe to a combination of pantheism and theism, a view scholars today call “panentheism.” As scholar of religion Gershom Scholem observed, panentheism is usually rooted less in faith, as the New York Times’s Ross Douthat said, than in experience. Like mystics here on Earth, the Na’vi have an experience of unity of consciousness with other beings, all of which (themselves included) are really just manifestations of one Being, which they call Ai’wa.”

In his article in The Forward, Michaelson focuses on the environmentalism theme of the film. He explains that the philosophy of Avatar “is a bit of pantheism, a bit of nature mysticism and a surprising dash of monotheism, as well. In other words, it’s Kabbalah, as filtered through the Hasidism of the 19th century and the neo-Hasidism of the 20th and 21st. “Avatar” tells the story of Pandora – the world of the Na’vi – threatened by human ore mining. Where “Avatar” departs from classical Kabbalah and Hasidism is in its environmentalism. Classical Kabbalah and Hasidism do not speak in “Avatar’s” environmental terms, because “environmentalism” would have made no sense to people living before the Industrial Revolution. 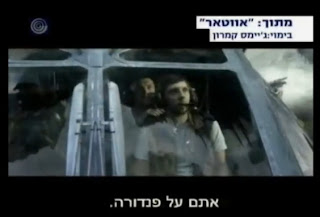 Rabbi Benjamin Blech, on the Aish.com website, covers many of the obvious Jewish themes in Avatar (Na’vi, man versus God, shomrei adama/protectors of the earth, etc.), but adds some fresh ideas as well. I especially like his theory that the mountains that hung over the heads of the Na’vi population are reminiscent of the midrash explaining that God held Mt. Sinai over the heads of the Israelites like an inverted cask (Babylonian Talmud, Shabbat 88a).

Sergey Kadinsky, writing on Heshy Fried’s “Frum Satire” blog, connects the outsider’s experience of Avatar protagonist Jake Sully trying to fit into the Na’vi community with a convert to Judaism.  He also notes the similarities between the Na’vi method of slaughter and that of the shochet (Jewish ritual slaughterer).

I found several other Jewish connections in Avatar; whether Cameron intended them or not, I don’t know. There are also a lot of connections to other religions including Christianity. In fact, I read an interview with James Cameron in which he said he wanted to have as many different faith traditions represented in the film as possible. Supposedly, the scene in which Jake Sully (Sam Worthington) carries the dead Dr. Grace Augustine (Sigourney Weaver) at the end of the film is supposed to be a reversal of Mary carrying Jesus. And I’m sure the name “Grace” is intentional. 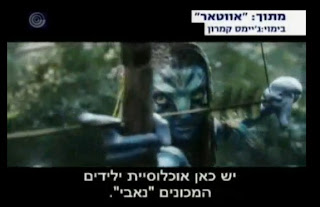 Perhaps the main character’s name “Jake” is intended to be like “Jesus” or maybe even the biblical patriarch Jacob. Since Jake Sully is transformed, his character could indeed be a link to Jacob who has to endure a wrestling match with God’s angel (Genesis 32:4-36:43) before his name is changed and he becomes the leader of the people. Jake Sully had to wrestle the toruk to be transformed and accepted by the people. After wrestling the toruk, he is able to connect to the being in a very powerful way. Jacob’s connection with God was bolstered following his transformative wrestling experience.  Additionally, Jake Sully had to go to a holy place (The Tree of Voices) before being accepted and it is in this holy place where he goes to sleep and dreams (When Jake sleeps as the Avatar, he wakes up as his human body). Jacob renamed the place in which he dreamed Beit El (House of God). Both Jake Sully and the Patriarch Jacob didn’t realize the places they were in were holy until they fell asleep there.

The “J” name for Avatar’s protagonist could also be symbolic of other nevi’im (prophets) in the Jewish Tradition, like Jeremiah, Joel, Job, etc. or even biblical kings like Josiah.

In Avatar, a Navi became close to another Na’vi by saying “I See You” or “Oel ngati kameie.” Each time I heard this, I focused on the word n’gati, which could come from the Hebrew nogeah, to touch or become attached. Variations on this word include the Hebrew term “nogeah badavar” (to be involved with) or n’giah (to touch someone).

Blech might be on to something when he reminds his reader that “the root word navi really means seer, someone with the capacity to see more than others. And that is exactly the point of the story.” That is, the Na’vi in Avatar couldn’t predict the future (or they would have seen the impending doom of the human army), but they did understand the power in seeing the “other.”

I’m not sure if the name Neytiri (played by Zoe Saldana) has any connection to the Hebrew word neturei, as in Neturei Karta (Guardians of the City), but she certainly saw herself as a guardian of Pandora. I know that James Cameron was advised by many linguists, so any of these connections are possible.

Kadinsky’s comparison of the attack on the Tree of Voices to the Romans breaching the walls of Jerusalem and the ultimate destruction of the holy Temple in 70 CE is apt. There might be some connections as well between Pandora and Eden, with the Tree of Knowledge considered to be off limits and then “attacked” for gain (knowledge of self in the Torah and unobtanium in Avatar). Lastly, I think there is a connection between the name of the Na’vi spirit Eywa and the Tetragrammaton name for God (YHWH).

Sure, it’s possible to just watch Avatar as another Hollywood blockbuster/Oscar nominee and enjoy the beautiful CGI scenery, a simple plot, and a politically charged clarion call to conserve our natural resources, respect indigenous peoples, and protect our environment against big corporations that can afford their own army. But, I think it’s more fun to look for the connections with different faith traditions. Some, like the Pope, will find the religious messages of Avatar problematic. Others, will find deep spiritual meaning in these metaphors.

I ultimately choose to pay homage to the brilliant work of James Cameron. Not only did he create an entertaining epic, he also gave us some challenging topics on which to meditate.