Rabbi Gerry Skolnik taught my senior seminar in rabbinical school and I’ve continued to learn from him since graduating from the Jewish Theological Seminary (JTS) through his weekly column for The New York Jewish Week and now his blog called “A Rabbi’s World.”. 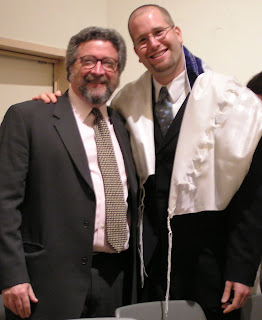 After hearing that an 86-year-old man crashed his Toyota into the front steps of Rabbi Skolnik’s synagogue, the Forest Hills Jewish Center, last week after the car’s accelerator stuck, I went to his blog hoping to get the rabbi’s first-hand account of how the Toyota gas pedal recall was affecting his synagogue in a very real way. But, instead of blogging about how this elderly man mistook the Queens synagogue for a drive-thru, Rabbi Skolnik wrote about another interesting topic: What happens to the daily minyan when there’s a blizzard? (He would have generated more traffic to his blog had he written about the Toyota recall instead of the minyan. I’m just saying.)

In his post titled Balancing Obligation and Common Sense, Rabbi Skolnik discusses the dilemma he faced after last week’s East Coast Blizzard (termed “Snowmageddon” by President Obama) when the treacherous driving conditions made it dangerous to hold the morning minyan (prayer services) at his Forest Hills congregation. He had to balance the obligation of saying the Mourner’s Kaddish (his mother passed away recently) and the obligation to not put one’s life (or his congregants’ lives) in unnecessary danger.

He writes, “Actually, there are discussions in the Talmud around the idea of ‘mitigating circumstances’ as they relate to prayer, but I don’t know of any that relate to blizzards.”

The need for a quorum of ten Jewish individuals (only Jewish men in Orthodox synagogues) in order for mourners to recite the Kaddish prayer is taken very seriously, and so the decision to cancel the minyan is a difficult one. Rabbi Skolnik explained his decision in his blog:

I decided that the obligation to safeguard one’s health under any and all circumstances can, in a situation like a blizzard, mean that one might not only be allowed to, but actually be required to stay inside, and not walk or ride to a synagogue during potentially dangerous weather – even if saying kaddish for a parent.  There are other ways to honor the soul of the departed, most significantly, to study Torah.  Kaddish is universally recognized as “what one does,” but there are other gestures of respect that elevate the soul of the departed closer to God.

While the snowfall in Michigan last week couldn’t rival the East Coast’s blizzard, the morning driving conditions were treacherous here too. But when I received an early morning text message from Rabbi Aaron Bergman of Adat Shalom Synagogue letting me know that I would be the tenth at the morning minyan, I jumped in the car and headed over. There’s something exhilarating about being #10 in a minyan and knowing that the mourners wouldn’t be able to fulfill their obligation without you. Driving down the snowy streets, I felt I was on an important mission (a police escort would have been helpful).

Traditionally, the daily minyan has been a very important part of Jewish life.  But I also think my teacher, Rabbi Skolnik, made the right decision. While it is commendable that he wanted to honor his late mother with the words of the Kaddish prayer, I’m sure that she wouldn’t have wanted him to risk driving in those conditions. And so, by calling off the minyan he honored his beloved mother too.