Like many rabbis, when I encounter an article about “Jewish life” in the mainstream press, I ask myself the age-old question: Is this good or bad for the Jews?

And that is precisely what I did yesterday when I read about the bar mitzvah party that is to take place at Yankee Stadium this June 5th and is now holding up the possibility of the stadium’s first boxing event that same night. 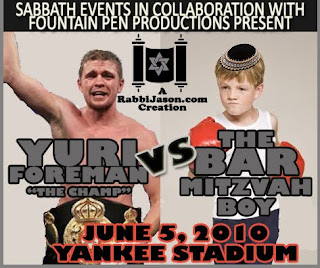 I’ve written about over-the-top bar mitzvah parties on this blog in the past, including the the $10 million Bat Mitzvahpalooza in 2005 featuring 50-Cent and Aerosmith. Now, Jonathan Ballan, the lead bond lawyer for the financing of Yankee Stadium, has reserved the stadium for his son’s bar mitzvah this June. The NY Times reports that “In addition to providing lounges, the Yankees promised to give the Ballan party access to the stadium’s giant scoreboard in center field for 30 minutes.”

But here’s the best part of the story: The boxing champ is none other than Yuri Foreman, an Orthodox Jewish fighter who is studying on the side to become a rabbi. In an ironic twist, there was no question of hosting a lavish bar mitzvah party at Yankee Stadium in the middle of the Sabbath day where all sorts of activities that are antithetical to Sabbath observance will be taking place. However, the boxing match was scheduled for after sundown to accommodate Yuri Foreman’s many Sabbath-observant fans in the New York area who couldn’t get to Yankee Stadium during the Jewish Sabbath out of respect for Jewish law and tradition.

So, in essence what we have here is a Sabbath-observant championship boxing match that will be trumped by the Main Event, a mega-party for a 13-year-old Jewish kid that is throwing a sharp uppercut to the concept of Jewish values.

So, the headline could very well be: “Jewish Boxing Champion Knocked Out By Bar Mitzvah Kid.”  And that just can’t be good for the Jews.