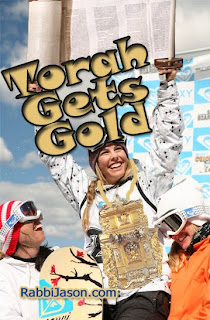 In synagogues, Jewish people put bright gold on the Torah (gold breastplate and crown). As we saw tonight in Vancouver: In the Olympics they put GOLD on Torah Bright (a gold medal).

Torah Bright has to be the best name for an Olympian who just won a gold medal. As she ascended the highest part of the podium to receive her gold medal during the ceremony, I’m sure many Jewish people noticed the symbolism of someone named “Torah” being displayed to the people atop the heights, as it is reminiscent of the Torah being displayed atop Mt. Sinai.

The Australian Torah Bright, a devout Mormon, was surprised before her snowboarding competition (half pipe) that her parents drove six hours, flew 20 more, then hid in a closet at her home in Vancouver so they could celebrate her gold medal with her.

I’m sure that after the Olympics, back home in  Australia they will have a parade for their Gold Medal snowboarder. No doubt, the Jewish community in Australia will refer to the day as Simchat Torah!