Gingrich’s Robocall emanated from a 2003 veto that Mitt Romney cast while he was governor of Massachusetts for denying $600,000 in additional funds for poor Jewish nursing-home residents to receive kosher meals. Last week, the the New York Post reported that Romney prevented the funding of $5 per day because he thought it would “unnecessarily” lead to an “increased rate for nursing facilities.” (Eventually, the Massachusetts State Legislature approved an amendment to restore the funding for the Jewish nursing home facilities.) 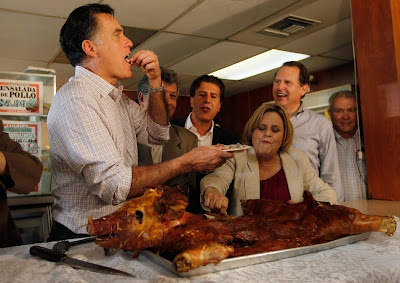 What is funny is that four days ago Zach Silberman wrote on JTA.org about Romney’s 2003 veto leading to kosher meal cuts for poor nursing-home seniors and concluded with this question: “Will Romney opponents try to make hay of the story in a state loaded with elderly Jewish voters?” The answer was: Of course they will.

Here is the text of Newt Gingrich’s Robocall:

As governor of Massachusetts, Mitt Romney vetoed a bill paying for kosher food for our seniors in nursing homes. Holocaust survivors, who for the first time, were forced to eat non-kosher, because Romney thought $5 was too much to pay for our grandparents to eat kosher. Where is Mitt Romney’s compassion for our seniors? Tuesday you can end Mitt Romney’s hypocrisy on religious freedom, with a vote for Newt Gingrich. Paid for by Newt 2012.