While last week’s decision by the New Jersey Jewish Standard to apologize for the inclusion of a gay wedding announcement and then retract the apology made big news, I didn’t have a chance to weigh in on it. But now, that New York gubernatorial candidate Carl Paladino has essentially done the same thing regarding the anti-gay comments he made to a group of Hasidic Jews, I thought I’d comment on both matters.

Newspapers, and especially Jewish newspapers, will never be able to please everyone. Stating that the newspaper is for the entire community is actually a shortsighted mission statement because every Jewish community will have its factions that neither read nor care about what is published in certain Jewish newspapers. Whether it is the decision to run advertisements for non-kosher restaurants or print interfaith wedding announcements, the Orthodox community will boycott the paper. And a Jewish newspaper that has a bias toward the Orthodox won’t be of much concern to a progressive audience.

Ultimately, what happened at the NJ Jewish Standard was neglect. The paper’s editorial board and staff neglected to have a thoughtful process about whether to publish gay wedding (and engagement) announcements in the first place. And when there was backlash from the Orthodox, they should have debriefed on the matter, gathered information, and sought counsel from local rabbis and Jewish leaders before issuing an apology. The quick decision to apologize for publishing the engagement of Avi Smolen and Justin Rosen (who, by the way, seem like a very nice couple and will be married by my colleague Rabbi Josh Gruenberg) and then making the statement that the paper will never again run such an announcement turned into a public relations nightmare. It took days until James Janoff, the publisher, issued a retraction of the editor’s statement which said, “The Jewish Standard has always striven to draw the community together, rather than drive its many segments apart. We have decided, therefore, since this is such a divisive issue, not to run such announcements in the future.”

In a statement posted to the paper’s website, Janoff said the New Jersey Jewish Standard probably should not have reversed its policy so quickly, “responding only to one segment of the community.” He said he is now holding meetings with local rabbis and community leaders, and will be printing many of the letters “that have been pouring in” on the issue. Without saying that the paper will print same-sex marriage announcements in the future, my sense is that in time they will.

Now on to Carl Paladino, who I’m convinced is a wish that was granted to Jon Stewart for his last birthday. Today’s New York Times reports that the alliance between Republican Carl Paladino and Yehuda Levin, an Orthodox rabbi from Brooklyn, has fallen apart, with the rabbi denouncing Paladino on Wednesday for his apology over remarks he had made about homosexuality on Sunday. It turns out that Rabbi Levin wrote Paladino’s anti-gay speech, so he was obviously angered when Paladino did a 180 and apologized for his “poorly chosen words” and said he would “fight for all gay New Yorkers’ rights” if elected governor. 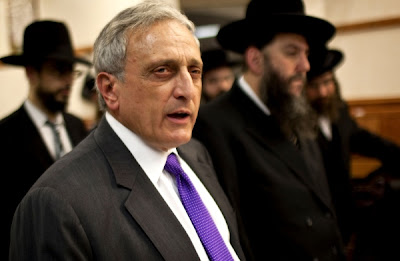 I’m not really sure how Paladino could be so naive to think that, in the 24-hour news cycle era, his offensive anti-gay remarks wouldn’t be broadcast all over the country within hours. During a meeting with a small Orthodox congregation that was arranged by Rabbi Levin, Paladino said that children should not be brainwashed into thinking that homosexuality was acceptable, and then he criticized his Democratic opponent, Andrew Cuomo, for marching with his daughters in New York City’s gay pride parade. While his comments obviously went over well with the Hasidic group, they didn’t play very well for the rest of the world.

There are some pretty funny lines in the NY Times story including Rabbi Levin explaining where he was and what he was doing when he learned of Paladino’s apology (emphasis is mine):

Rabbi Levin said he was especially upset that Mr. Paladino gave him no notice that he planned to back away from the comments. “I was in the middle of eating a kosher pastrami sandwich,” Rabbi Levin said. “While I was eating it, they come running and they say, ‘Paladino became gay!’ I said, ‘What?’ And then they showed me the statement. I almost choked on the kosher salami.”

So, was it a kosher pastrami or kosher salami sandwich, Rabbi Levin? And I love how he had to mention that it was “kosher.” Did he think that folks would question whether he was eating a non-kosher sandwich?

The Times then had to clarify that Paladino hadn’t actually become gay (of course):

Mr. Paladino, of course, had not become gay, but had announced that he wanted to clarify that he embraced gay rights and opposed discrimination. In explaining his views, Mr. Paladino and his aides noted that he had a gay nephew who worked for the campaign.

So, what did Rabbi Levin have to say about Paladino’s gay nephew?

“He discovered now he has a gay nephew?” the rabbi said. “Mazel tov! We’ll make a coming-out party!”

So, my question is: If the Hasidic Rabbi Yehuda Levin makes a coming-out party for Carl Paladino’s gay nephew, will the New Jersey Jewish Standard announce it in their paper? You just couldn’t make this stuff up!