I’ve been thinking a lot about sacred space recently. Of course, I give much thought to the concept of what makes a place holy (or sacred) whenever I am in Israel. At each turn one encounters a sacred location from Jewish history.

However, what turns a place that is generally considered to be a secular place into a sacred one? 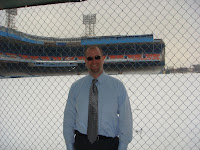 Last week, after I taught my monthly class on Jewish business ethics at a Downtown Detroit law firm I began to drive back uptown to the suburbs. When I turned to get on the highway I saw the old Tiger Stadium in the distance. While Tiger Stadium hasn’t been used as the home field of the Detroit Tigers since the Tigers last played there on September 27, 1999, it is still very much on the minds of Detroiters and Tigers fans. Seeing the vacant stadium (or what’s left of it since some of it was demolished earlier this year) standing there at the corner of Michigan and Trumbull, I was lured to go pay a visit. I parked my car along the street where the Right Field wall once stood — the area where my favorite player Kirk Gibson used to defend the outfield. I got out and took some photos of the snow-covered park. I felt extremely nostalgic about the baseball stadium where I viewed my first Major League game (and many more after that).

There is much debate about what will become of the old Tiger Stadium, but no matter what it is used for (hopefully little league games) or how it is memorialized (hopefully a museum) there is no question that for me it is sacred space.

This is true of other places in my life as well. I’m sure that many years from now, the Palace of Auburn Hills (home to the Detroit Pistons for the past twenty years) will also become a sacred space to Pistons fans like me who have enjoyed watching them play there (even though I have fond memories of watching the Pistons play at the Pontiac Silverdome as well).

Some places have sentimental value because they haven’t changed much over the years. My oldest son is a preschool student in the exact same classroom where I was a preschool student at Adat Shalom Synagogue in the early 1980s. The classroom hasn’t changed much since then, so each time I walk in to drop him off for school I experience yet another flashback to my childhood. Of course, it has been transformed into a more modern classroom to keep pace with the educational advances of the past three decades. A few years ago I even taught a class in that same room for teenagers and found that to be a surreal experience (at least during the first class). That classroom is certainly a sacred space for me as it is the location where both my formal education and my first born child’s formal education commenced. Independent of the fact that it is in a holy place (synagogue), it still carries sacredness. It is sacred space. 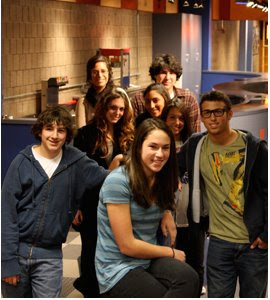 A couple days ago I was given a tour of the JCC’s new Beverly Prentis Wagner Teen Center (right) by director Lindsey Fox. It is a very impressive site with ping pong tables, foosball, Nintendo Wii spots, computer labs, a snack-bar, video games, and more. The fact that thousands of Jewish teens will now gather socially in a space once occupied by a memorial to the Holocaust was not lost on me. As soon as I entered the teen center I remembered the chill I felt each time I visited the Holocaust center. I remembered the buzzing sound of the lights above and the coldness of the brick walls. Certain things haven’t changed much in the space. The movie auditorium where I once viewed survivor testimonies looks the same — although now teenagers will watch High School Musical and Adam Sandler movies there. The small seating areas where I once watched films of the Nazi killing machine on small televisions will now be used for Jewish youth to play video games on flat screen monitors. And the conference room where Holocaust researchers once lectured will now be filled with Jewish youth group members eating pizza and socializing.

This is the best way to demonstrate that some sixty years since the end of the Holocaust the Jewish people have endured. This is a loud statement that the Nazi attempts to eradicate the Jewish people were unsuccessful.

A beloved baseball stadium left vacant that will soon be used for youth baseball. A nursery school classroom occupied by multi-generations. A Holocaust memorial center transformed into a Jewish teen center. Each of these is a sacred space transformed to preserve its sacredness.