Another “Day of Atonement” has come and gone. While Rosh Hashanah is the official beginning of the new Jewish year, it always seems that it is not until the conclusion of Yom Kippur that the new year really commences. So, I say “Bring it on 5770!” you can’t be any worse than the past year that brought us the Madoff scandal, Swine Flu, and the death of so many celebrities including Michael Jackson, Ed McMahon, Patrick Swayze, Teddy Kennedy, Walter Cronkite, William Safire, Farrah Fawcett, Paul Harvey, John Updike, etc. etc.

While, traditionally, there are 100 shofar blasts blown on Rosh Hashanah, the call of the shofar to end Yom Kippur always seems to make headlines. There certainly is the pomp and circumstance that surrounds the powerful “Tekiyah G’dolah” signaling the end of the fast day. 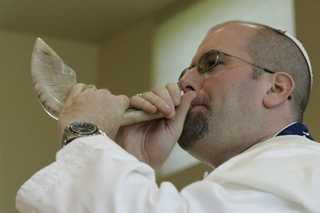 When the Detroit Free Press informed me they would like to take my photo to accompany an article in which I was interviewed, they of course requested that I blow shofar for the photo. I forgot to bring one of mine and I couldn’t locate a shofar at my synagogue since all of our shofar blowers bring their own (“B.Y.O.S.” I suppose). So, I told the Freep’s photographer to give me a few minutes and I headed over to the Jewish Community Center where I borrowed a brand new shofar from the Judaica display.
(The Photo by Patricia Beck of the Detroit Free Press is above.)

Much more interesting than the photo of me blowing shofar is NPR’s profile of Dizzy Gillespie’s goddaughter, Jennie Litvack (at left), who blows shofar at Congregation Adas Israel, a Conservative synagogue in Washington, D.C.

“We developed a very special relationship.” Litvack says playing the shofar is something Gillespie would do, but she never saw him or heard him do it. “He was a Baha’i,” she says. “We used to have great conversations about Judaism and Baha’ism and the oneness of mankind. But I do say when I play, I also feel Diz, I feel his connection with me, and that feels really special.”

In the Free Press article, I was asked what the themes of my Yom Kippur sermons would be about. The reporter, Niraj Warikoo, seemed interested in the sermon I delivered on Yom Kippur morning about how we communicate with each other and ask forgiveness in the Digital Age. Using social media websites like Facebook and Twitter to communicate with the many people in our lives is fine to do, I explained, but when it comes time for performing teshuvah (asking forgiveness from our friends for our shortcomings) a personal connection is the ideal.

Right before Kol Nidrei services (the beginning of the Yom Kippur holiday) on Sunday, I noticed the following status update from one of my Facebook connections, Rob Kutner (former writer for the “Daily Show with Jon Stewart” and current writer for the “Tonight Show with Conan O’Brien”):

Rob Kutner asks forgiveness of anyone he may have wronged unintentionally this past year, and wishes Jews an easy fast, and everyone else an easy Monday. Sun at 6:55pm

Seems like the “easy way out” rather than picking up the phone or sending a personalized, carefully-worded email message to the individuals he wronged unintentionally. (I actually wonder if he wants forgiveness from those that he wronged intentionally.)

With the recent attraction of the six-word memoir and status updating “tweets” limited to 140 characters, we are downsizing our communication. While I’m a fan of these social networking sites, I certainly hope we’ll take the time to actually talk to those closest to us… especially when it’s forgiveness we’re looking for.