I remember when I lived in New York City seeing the commercial for the New York Times repeated several times a day on television. The young, metropolitan couple would be sitting on the couch on a lazy Sunday morning. She would comment that when the New York Times arrives she always goes straight to the “Arts and Leisure” section, while he goes straight for the Sunday Magazine.

For the past decade I have been the one to go straight for the Sunday Magazine too. Whether in print or online, I can’t wait to read “The Ethicist” and William Safire’s “On Language” column. I’m not sure I consider myself an etymologist, but I have always been interested in the English language. After falling in love with Mr. Safire’s “On Language” column I began to read his columns in the Times paper as well. I found him to be a brilliant, inspiring writer who always captivated my attention within his first paragraph. 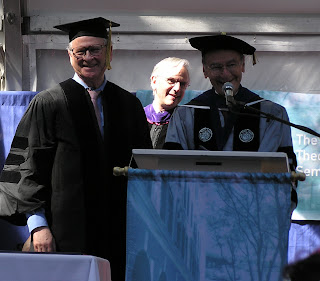 I was therefore thrilled when it was announced that William Safire (at right with Chancellor Ismar Schorsch) was to be the keynote speaker at the 2004 Jewish Theological Seminary commencement when I graduated from rabbinical school and received a master’s degree from the William Davidson Graduate School of Education. In fact, one of my favorite photographs from graduation was the one posted below of me walking across the stage to shake the hand of Rabbi William Lebeau (Dean of the Rabbinical School) as William Safire looks on.

The most humorous moment of that commencement was while Mr. Safire was delivering his speech and his cellphone rang. Since he kept it in his breast pocket, the phone rang directly into the microphone and was thus amplified for the entire crowd to hear. Of course, everyone checked to see if it was their cellphone ringing. After what seemed like several minutes, Mr. Safire realized it was his phone, took it from his pocket, looked at it and deadpanned “I’m sorry, it’s the Whitehouse.” Everyone laughed. I’ll never know if it was actually the Whitehouse calling. 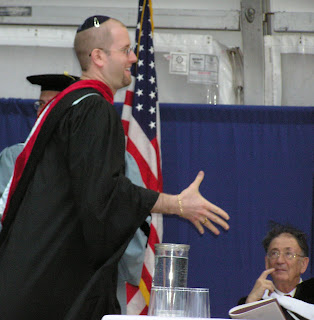 One of my teachers at the Seminary, Prof. Burt Visotzky, tells the story of getting to know William Safire in Washington D.C. when Rabbi Visotzky would serve as the guest rabbi at Adas Israel for the High Holy Days. Rabbi Visotzky asked Mr. Safire why he stopped coming to synagogue regularly during the rest of the year. Mr. Safire responded, “Because all the rabbi does is talk politics. I don’t need to come to shul to hear what Bill Safire wrote in the Times.”

William Safire died today at the age of 79 from Pancreatic Cancer. I will always remember his insightful columns on language and on the politics of the day. Indeed, I consider him to be one of my teachers. I will also remember that on the day he succumbed to Pancreatic Cancer, the same disease that took my uncle’s life seven months ago, I was taking part in a walk to support the Pancreatic Cancer Action Network (PanCAN).

May the memory of William Safire be a blessing to his family and all of his many fans.