Just about every summer camp today has policies in place regarding the use of technology by campers. Rules governing whether campers can bring their cell phones, iPods, digital readers, and smartphones to camp (and if so, when they can use them) have been part of ongoing discussions as new forms of technology are introduced into the marketplace. 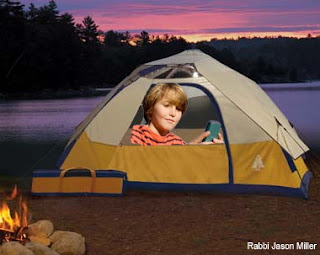 The most important thing to remember about these rules is that they are being created by people (AKA, adults) who know far less about these gadgets than the young campers. And where there is a will to use these devices at summer camp, the campers will find a way to use them.

Marjorie Ingall, who wrote a wonderful parenting column in the Forward newspaper for many years under the pseudonym “The East Village Mamele,” argues for keeping kids unplugged at summer camp in Tablet Magazine. She writes:

The most significant difference between my kids and me, though, is that they can’t imagine being unwired. I showed them a picture of Gordon Gekko holding his then-super-futuristic cell phone in the movie Wall Street, and they asked if it was a giant walkie-talkie. Josie recently quizzed me about Superman: What was a phone booth, and how did he change clothes in it? When I tell her we had to stand up and walk over to the television to change the channel and that we only had telephones attached to walls, she stares at me as if I’m speaking Urdu. I showed her Atari’s Pong, the antiquated video game we played on my TV growing up; she thought I was playing a joke.

So, is today’s sleepaway camp—with its lake, trees, cabins, chadar ochel, and drama and crafts bungalows looking exactly as they did generations earlier—an artifact, an artificial construct belonging to an earlier time, like some New World version of a Roman Vishniac photo? Is it ridiculous to expect kids to give up their iPods, handheld computer games, Facebook, Twitter, IM? Can we really trap them in this historical setting, like bug-spray-scented, cell-phone-less flies in amber?

My answer: We not only can; we should. Kids need unplugging… [I]n the summer—the last vestige of carefree childhood in a high-pressure, high-connectivity world—kids should be forced to interact face-to-face with each other, with their counselors, and with a sylvan world. It’s one of the last great communal spaces for kids. Every camp has its own rules about the use of technology, of course. Some allow cell phones but let kids use them only right before Shabbat or right before bed. Others allow iPods in the bunk only. (In my day, at rest time, we were allowed our giant, awkward Walkmans that seemed the height of techie cool.) But whatever a camp’s written rules, compliance varies. One Jewish website is rife with whispered tales of texting in bathroom stalls.

A June 2008 article in TIME Magazine by Nancy Gibbs titled “The Meaning of Summer Camp” also lamented the use of cellphones in what is supposed to be a euphoric environment for children. She wrote, “So I applaud the effort of traditional camps to pull the plugs: the ACA found in a 2007 survey that at least 3 out of 4 camps make kids leave their gizmos at home. It probably tells us something that the resistance often comes not from the kids but from Mom and Dad. Parents have been known to pack off their children with two cell phones, so they can hand over one and still be able to sneak off and call. Camp expert Christopher Thurber reports that parents grill directors about why they can’t watch their kids’ activities from a webcam or reach them by BlackBerry. Services like CampMinder and Bunk1.com do let camps post news and pictures to ‘help our families to feel as if they are with us at camp,’ as a Texas camp owner puts it. But that just invites inquiry about why Johnny looks sad or how Jenny’s jeans got torn.”

The problem is that children today are already wired to be, well, wired. The know about connectivity. They own the latest, greatest gadgets. Asking them to be stripped of their iPods and cellphones before boarding the camp bus is like asking them to board the bus naked. And yet, there’s so much to be gained from experiencing a summer unplugged. A summer in which a child cannot text Mommy and Daddy after every skinned knee or breakup with the boy in Cabin 3.

There is a slippery slope in the question of just how unplugged campers should be at summer camp. After all, if campers of previous generations were allowed to pack their boom box, and then their Walkman cassette player, and then their portable CD players, shouldn’t it follow that today’s campers should be able to listen to their Apple iPod on their bed during rest hour?

And if they are allowed to bring an iPod, what about the Apple iTouch with WiFi capability? What if the iTouch is used to surf the Web and email the parents back home?

And if books are allowed at camp (and of course, they are!), what about an Amazon Kindle? Or how about the new Apple iPad? What if the iPad is used to text friends back home?

Of course, the children who go to a day camp can return home each night to plug into their technological universe, but they are missing out on so much that the overnight camping experience has to offer. While there is something quite cool about little kids living in tents and wood cabins in “the middle of nowhere” still being able to connect to those satellites floating in outer space in order to download the latest songs, it’s just not right.

Even if the technology is now available that allows campers to open their iPads and watch each pitch of the baseball game in real time while chatting with Dad, they should still have to do what I did — Listen to the late Ernie Harwell calling the game over the transistor radio that was buried under my pillow while I wrote my “old man” a letter the old fashioned way… with a pen and paper.