The story was recently told to me about a Facebook user who updated her status message to announce the death of her grandmother and the grief she was feeling because of the loss. Her friend’s mother, a Facebook newbie, read the status update and clicked Facebook’s “Like” option. Was this a Facebook faux pas or a way to express condolences in the era of social networking?

We are all trying to make sense out of how to deal with death when it comes to Web 2.0. Here are some questions that arise with regard to social networking when a loved one dies.

In her Christian Science Monitor article, grief expert Diana Nash writes, “After the typhoon in Indonesia, after the deaths of Patrick Swayze and Michael Jackson, after school shootings, and in the wake of suicides, young people in mourning are now turning to social networking sites such as Facebook for support. This raises the question: Are social networking sites a better spiritual partner than a church, mosque, or temple? If you search for ‘In Memory of…’ on Facebook more than 100,000 results pop up.”

Clearly, young people are using social media sites like Facebook as an outlet for their grief. Facebook is a community populated by one’s friends in which those grieving can express themselves without censoring one’s emotions. Many people who were not comfortable talking about personal matters like grief and mourning feel comfortable sharing a few words on the computer to their network of linked friends.

What is the etiquette for announcing a death on Facebook?

Over the past couple of years, I have seen an increasing number of deaths announced through status updates on Facebook. When someone hears of a person’s passing and immediately updates his status by expressing his grief, the modern form of the condolence book has been set up. Others are now free to comment on that status update by offering their condolences to the bereaved, sharing a memory of the deceased, or expressing their own grief about the loss.

Certain questions arise before announcing to the Facebook community through a status update that someone has died. Perhaps the immediate family wants to make this announcement itself? Perhaps the survivors want to wait until certain decisions are made before informing the public (e.g., funeral arrangements)? If the death was tragic or unexpected, the delicate wording of the “announcement” is critical.

What is the status of the deceased’s Facebook page?

An October 28, 2009 article in TIME focused on this very subject. TIME reported that “In an Oct. 26 blog post, Max Kelly, Facebook’s head of security, announced the company’s policy of ‘memorializing’ profiles of users who have died, taking them out of the public search results, sealing them from any future log-in attempts and leaving the wall open for family and friends to pay their respects. Though most media reports claimed this was a new Facebook feature, a spokeswoman for the company told TIME that it’s an option the site has had since its early days.”

If this policy had been around, why did Facebook’s Max Kelly decide to publicize the memorializing of profiles in a blog post? When Facebook rolled out its new version a few days prior to Kelly’s blog post, a new feature automatically generated “suggestions” of people to “reconnect” with. On a personal note, I’m still receiving the automated suggestions by Facebook that I should reconnect with my deceased uncle. (Thank you Facebook, I try!)

Kelly’s explanation of how to put a deceased loved one’s Facebook page in the special category generated a lot of attention. To date, there are over 2,300 comments on his post.

Assuming that a family chooses to  not  put its deceased loved one into the Facebook memorial vault, what is the etiquette with regard to the ongoing maintenance of the deceased Facebook page? Should a family member gain access and manage the page? After all, what if someone posts a comment on the deceased’s Facebook that the family wants removed?

About a year after my uncle’s death, my cousin logged into his father’s Facebook account and accepted the “friend requests” that my uncle wasn’t able to accept in his final week’s on this earth. You can imagine the surprise (if that’s what it was) that some people felt when they were told that they were now “friends” on Facebook with a man who passed away a year prior. Maybe the ‘memorializing’ of profiles is the best policy after all?

And there’s an expert available who can help families create a Facebook obituary. R. Brian Burkhardt is “Your Funeral Guy” and his website describes the steps toward creating a Facebook Memorial.

Should we set up a Facebook page for the deceased?

As soon as a person dies (especially a young person), there is often a race to create the Facebook page in their memory. This can serve as a place to direct the community’s grief through sharing memories, posting photos, and disseminating information about memorial services, donations, etc. Before creating a Facebook page in memory of a loved one, it is important to check to ensure that there is not already one created. The administration of the page is also important to ensure that no inappropriate comments or photos are posted.

My teacher, Rabbi Brad Hirschfield, wrote about “Mourning and Consolation on Facebook” in his Windows and Doors blog on the Beliefnet site. He reminds us that “The safety which media like Facebook create is a crucial element in grieving process – the safety to say whatever we want without fear of repercussion and the safety of knowing that whatever we say, someone is listening. On the other hand, the care of one’s family while they mourn, the attention to details that can only be addressed by those among whom we live, and the likelihood that only in the context of a physical community bound together by more than he desire to share their grief, will such things be properly addressed should not be forgotten in the rush to Facebook mourning groups.”

No doubt, a new etiquette will form for offering condolences to mourners in the social networking age. Until there becomes an agreed upon protocol, however, common decorum should serve as the guide. When a mourner announces the death of a loved one in a Facebook status update, it is appropriate to offer condolences as a comment to the status update or as a wall post. Traditional forms of consolation toward the mourner should then follow, whatever one’s faith dictates (attendance at the funeral if possible, a tribute in the deceased’s memory to a charity, condolence call, etc.).

Rabbi Hirschfield writes, “There are also new possibilities including online visitation of mourners, saying Kaddish with a virtual minyan, the buying and delivery of virtual food to the homepages of mourners, just to name a few. While the latter is not physically nourishing, and that may be a crucial aspect of the tradition of feeding mourners, can we deny it’s value as psychological and spiritual nourishment?” 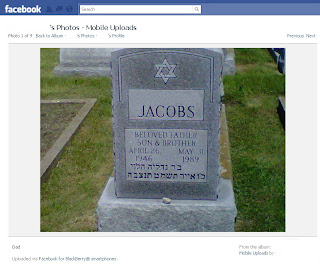 As I am writing this post, I logged into my Facebook account and saw that a friend had posted a photo of his father’s tombstone since today is his father’s yahrzeit (anniversary of the Jewish date of death). I hadn’t known that he lost his father (almost eleven years ago according to the date on the memorial stone) and neither did several of his other friends on Facebook according to their comments to the photo. This photo, simply captioned “Dad,” allows his friends to share their condolences on his father’s yahrzeit.

And yet, there’s something deeper at work here. Yes, there are friends from around Cyberspace who are offering their condolences or expressing surprise at not having known his father had died over a decade ago. But there are also those who are now finding relief in admitting that they too take photos of loved ones’ graves. As one commenter wrote, “I’m glad to know that I am not the only one who takes pictures at the cemetary [sic].”

No one has clicked the “Like” option for the photo. At least not yet!