Hall of Fame baseball broadcaster Ernie Harwell died on Tuesday. He was 92. He had been battling cancer for over a year. It was his time to go and yet his passing has cast a pall over Detroit. Upon hearing of his death, I began to feel both sad and nostalgic. To paraphrase Ernie, “I stood there like the house by the side of the road.” Ernie Harwell was Detroit Tigers baseball and his legendary voice was the voice of my youth. 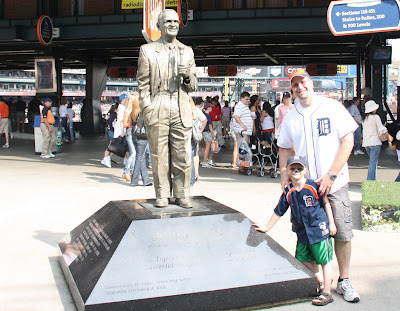 He looked frail the last time I saw him — at the Fox Theatre in Detroit sharing a conversation on stage with Mitch Albom in front of a packed house. He lived in a retirement community where my wife’s grandmother lives and she reported that he no longer ate in the dining room. Rumors spread that he was in hospice care, confined to his room at Fox Run in Novi. His death was expected. And yet, it stung the city and baseball fans everywhere.

My first inclination was to write about this loss and to pay tribute to the man. Yet, over the years I’ve only posted on this blog through a Jewish perspective. Where’s the Jewish angle in Ernie Harwell’s death, I wondered. He was a man of faith — he became a born-again Christian during a Billy Graham Easter service. He was even baptized in the Jordan River. He certainly wasn’t a Jew.

And yet, there was something about Ernie Harwell that strikes me as so-very-Jewish. He was the epitome of a mensch. No one had an unkind word to say about Ernie. The Emory University graduate was a gentleman and possessed a Southern charm. He was full of wit and wisdom. And he was more than charitable throughout his entire life. His foundation supports the arts and college scholarships. He also possessed what is known in Hebrew as a kol na’im — a pleasant voice. It was that memorable voice to which I would doze off as I listened to Ernie call Tiger games on the radio at summer camp. I listened to that voice on those long car rides Up North and as background noise when I did my homework in high school. 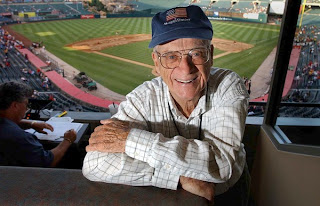 Mitch Albom wrote a beautiful tribute to Ernie Harwell in yesterday’s Detroit Free Press. I was moved to tears reading his account of how Ernie would welcome new broadcasters into the press box. “[Someone] would nudge the new guy and say, ‘Do you know who that was? That was Ernie Harwell. THE Ernie Harwell.’ No one ever earned a ‘THE’ more than him.”

It’s difficult to explain why so many people feel so heartbroken about a 92-year-old baseball broadcaster dying. I suppose it’s because the voice of baseball is gone and baseball is more than just the American pastime; it’s a religion too. A friend of mine remarked that when Ernie Harwell died, his childhood finally ended.

This evening at my son’s little league game, one of the players hit a foul ball that was caught by the opposing team’s coach. Without even thinking, I said: “A fan from Farmington Hills caught that one.” I smiled. So did everyone around me. It was one of his trademark phrases.

This morning at 7 a.m. fans began to pay their respects to Ernie Harwell at a public viewing at Comerica Park. At midnight there was still a line around the stadium. A fitting tribute indeed.

I’ll close with the words of my boyhood hero, Tigers slugger Kirk Gibson: “”He was an icon. The saying that you treat people the way you want to be treated, he represented that to its fullest.”