I’ve long had a love-hate relationship with the Detroit Jewish News‘ “Cap & Gown Yearbook.” Started in the late 1980’s, the JN includes an entire section in one of its late-May issues devoted to the “best and brightest” high school graduates in the area.

Before I comment on this year’s change in the submission rules, allow me to explain the love-hate relationship I’ve had. [Full disclosure: I cannot include the Cap & Gown issue on my CV.] 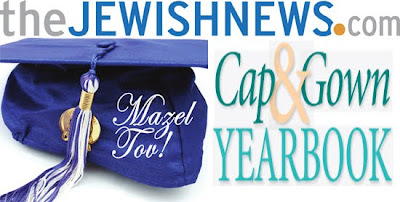 I loved the Cap & Gown issue when I was working at the University of Michigan Hillel Foundation in Ann Arbor. At the end of each graduating senior’s bio (AKA “Brag Paragraph”), it listed where they were headed for college. The vast majority were either going to Michigan or Michigan State with a couple handfuls of Ivy Leaguers. Each year when the Cap & Gown section was published, I immediately tore out the pages from the newspaper and marked the incoming class of Jewish kids at U-M with my yellow highlighter. These would be the first freshmen I’d welcome to campus in the fall. Their high school accomplishments were listed right there. I knew who the Jewish youth group leaders were and which of these 18-year-olds had volunteerism in their DNA. The Jewish News was doing my reconnaissance work for me.

Working with high school students is a different story. They are already under such pressure to succeed in high school that making the cut for the Jewish High School Academic Hall of Fame only adds to the stress. Over the past couple decades, the standards for inclusion in the Cap & Gown section have changed. When I was in high school (Andover Class of 1994 for those of you scoring at home), seniors needed a minimum grade point average (GPA) and had to be chosen by their school. That meant it was much more difficult to be one of the top Semites at predominantly Jewish schools like West Bloomfield, Bloomfield Hills Andover, and North Farmington than it was at say Birmingham Seaholm, Detroit Country Day, or any of the Walled Lake schools (this was the 90s after all). In fact, I remember one of my peers from West Bloomfield High School complaining to the Jewish News that she should have been included even though her GPA wasn’t at the newspaper’s standard. She was the editor of the school paper, president of her Jewish youth group, and had a handful of other notable credentials. The paper caved and printed her bio the week after the Cap & Gown issue alongside her irate letter complaining of the unfair selection process.

In the past decade, the standards have eased and there are a lot more graduates included in the Cap & Gown issue. Only 40-some Jewish teens were honored in the first Cap & Gown Yearbook in the late 1980’s, but last year’s section included 224. Even with that many star teens included, there are still many talented and accomplished teens who are left on the sidelines.

As the paper explained in a March 2010 blurb: “[E]very year, whatever criteria the newspaper used to determine eligibility would leave out many deserving students. This year, the Jewish News is inviting every Jewish student who is graduating from a Michigan high school to be part of our new Cap & Gown Yearbook. Publisher Arthur Horwitz said, “We’ve grown from several dozen entries to well over 200 of our community’s high school seniors who attained a qualifying grade point average. It has been one of our most popular issues and a keepsake.”

So, the question is: Why after 20 years of a competitive process (on varying levels), has the Detroit Jewish News decided to include every graduating Jewish high school student into the Cap & Gown Yearbook? Here are some theories:

1) It’s the Economy Stupid: It’s no secret that print media is in hospice care. Newspapers are ending home delivery and magazines are closing (Newsweek was put up for sale just yesterday). The Jewish News has laid off most of its workforce and reduced the hours of those who are left. The Cap & Gown issue generates a lot of money from proud parents, bubbies and zaydies who take out paid advertisements to congratulate their graduates. I’m sure the thinking was that the more teens who are included in the Cap & Gown Yearbook the more ad revenue. And that’s just business — plain and simple.

2) Everyone’s a Winner: In the 21st Century, we’ve become more politically correct and therefore uncomfortable to proclaim winners. The Jewish News simply doesn’t want to be put in a position to say that this young person is an achiever while this one is not. It’s not good for PR (or for selling newspaper subscriptions for that matter) when people perceive that the community’s paper has rejected their daughter.

3) Whose Standards?: I’m hoping that this was ultimately the reason the JN decided to let all who have graduated come and be recognized. Ideally, the Jewish News has realized what most employers realized a long time ago. A person’s GPA only tells part of their story. The many high school graduates who lacked book smarts but spent their high school careers volunteering with disabled children, working part-time jobs, and starring in school theater productions should be celebrated alongside the bookworms who carried 4.0 averages with little extra-curricular notches in their belts.

I’m sure that the Jewish News’ decision to not exclude any Jewish teen from this yearbook was based on a combination of all three of these theories (and likely others too). After all, this also put the Jewish community’s newspaper in the awkward position of deciding who is a Jewish teen. Of course, with every graduating senior being included, the Cap & Gown Yearbook will undoubtedly lose its clout. Will parents be as honored when they see their 3.9 GPA varsity soccer captain who’s headed to Penn listed in the paper next to a 2.0 GPA kid who’s off to Oakland Community College in the fall? We’ll see about that.

The paper articulated the mission of its new Cap & Gown section, explaining, “In recognition of the achievements of all of our high school graduates, this year’s Cap & Gown will be expanded. Think of it as a community-wide version of a high school yearbook. It will show the continuing vitality and promise of our community’s future generation, and the array of higher education choices they are making.”

I’m all for showcasing the promise of our Jewish community’s future generations. I’m just wondering if the lack of a selection process will make this issue too heavy to hold… which I guess is a really good thing for both our community and the Detroit Jewish News. Mazel Tov to all of this year’s high school graduates. You’re all winners!