“On the morning of the day before the funeral of Yitzhak Rabin, Senator Ted Kennedy called the White House to inquire if it was appropriate to bring to the burial some earth from Arlington National Cemetery. The answer was essentially a shrug: Who knows? Unadvised, the senator carried a shopping bag onto the plane, filled with earth he had himself dug the afternoon before from the graves of his two murdered brothers. And at Mount Herzl in Jerusalem, after waiting for the crowd and the cameras to disperse, he dropped to his hands and knees, and gently placed that earth on the grave of the murdered prime minister.

No spin, no photo op; a man unreasonably familiar with bidding farewell to slain heroes, a man in mourning, quietly making tangible a miserable connection.” 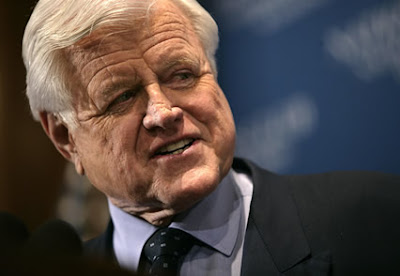 Senator Kennedy was a strong supporter of Israel and Soviet Jewry. Throughout his career, he was an ally of the American Jewish community. The legacy he leaves behind is an impressive one. As Rabbi David Saperstein wrote, “As a champion of the poor, the ill, the downtrodden, the very old and the very young, Sen. Kennedy’s unwavering passion for and dedication to imbuing the laws of the United States with justice and equality truly embodied the essence of social justice…”

May the noble actions of Ted Kennedy serve as an example for all humankind, and may his family be comforted by their memories of him.