Somehow, the rabbinic associations of both the Reform and Conservative movements decided to hold their conventions this week in our nation’s two most notorious cities of sin — New Orleans and Las Vegas respectively.

I’m not attending either convention in person (does Twitter count?), but I have been following the speeches at the Rabbinical Assembly Convention (Conservative) in Vegas that have been streamed live on Ustream. All of the sessions seem to focus on the future of Conservative Judaism and what the leadership thinks is currently ailing the movement.

Watching my colleagues discuss “The Paradox of Growth in the Conservative Movement,” it occurred to me that to make Conservative Judaism vibrant again, we need to look at Ronald Reagan for guidance. That’s right, Ronald Reagan! The former president famously explained his departure from the Democratic Party to the Republican side by saying, “I didn’t leave the Democratic Party. The party left me.”

In other words, the Democratic Party changed and Reagan wasn’t willing to adapt. So he left. I’m not suggesting that Conservative rabbis leave the Conservative Movement en masse because it has changed. I am, however, suggesting that we — the professional leadership — adapt to the changing times. 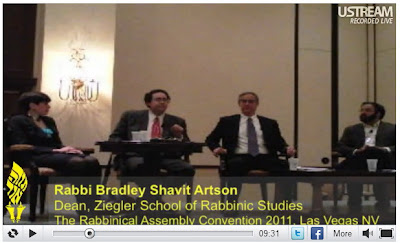 The opening plenary session demonstrated this need. “The Paradox of Growth in the Conservative Movement” session began with a failed attempt at humor by Rabbi Brad Artson that underscores my point. One of the brightest rabbis today, Artson is a great speaker and well respected among his colleagues. But his joke came up empty. Riffing on the title of the session (“Paradox”), Artson referenced Allan Sherman’s pun that Casey and Kildaire are a “pair a docs.” Get it? Pair a docs… paradox. Nobody laughed. I had to look up the reference. Turns out that if you weren’t around back in the early 60’s (at least half of the room at the convention), you’re not going to remember the Ben Casey television series. You also might not be up on your Allan Sherman references if you’re under 55-years-old.

And that’s the problem with Conservative Judaism today. It’s not the 60’s or even the 70’s anymore when Conservative Judaism enjoyed its heyday. My grandfather of blessed memory, sitting in a synagogue thirty years ago, would have loved it had the rabbi quoted the Allan Sherman pun about the hospital drama from 1961. I don’t know that Artson needed to open with the “paradox/pair-a-docs” pun, but at least he could have referenced a hospital drama on TV from the past twenty years (ER, House, Scrubs). Even a St. Elsewhere reference might have included more of the rabbis in the room who came of age in the 1980s. After all, the most recent rabbinical school graduates were born in 1985.

Artson actually has his finger on the pulse of the younger generation and keeps up with the current trends more than most rabbis of his generation. He serves as the dean of the Ziegler Rabbinical School at the American Jewish University — the West Coast’s rabbinical seminary that trains Conservative rabbis. In fact, he redeemed himself after the pun FAIL last night. He even labeled his bad joke as “the old Conservative movement” and then went on to explain that rabbis need to embrace the Digital Age and exploit social media.

Artson shared a story of a mock job interview at the American Jewish University in which a rabbinical student about to graduate told the interviewers that in order to respect their time he would put his cellphone on the table in front of him. The interviewers (all older adults) looked at this student like he was crazy. Artson had to explain that for this 20-something’s generation the cellphone has become the wristwatch. There was an obvious culture gap. I tell rabbis all the time that if they want to communicate with high school and college students, they need to text or use Facebook chat. Email is dead to that young generation and we have to keep up with the trends if we want to be relevant.

The Conservative Movement has changed because our culture has changed. Americans are being pulled to the extremes in all areas of society, especially religion. The institutions of the Conservative movement have grown stale by not keeping up with the times, but as the head of the Rabbinical Assembly, Rabbi Julie Schonfeld, has articulated, “The paradox of growth in the Conservative movement is that we have to separate movement from institutions.” Conservative rabbis who have been out of the seminary for more than ten years haven’t changed, but they need to change because the culture has changed. Conservative Judaism has long waved the banner of “Tradition and Change.” If that is to continue to be the mantra of this centrist branch of modern Judaism, then there must be a response to the change. “Tradition” must continue to be at the fore, but the way in which it is packaged and sold has to change. It’s a different world out there.

The borders have disappeared in the 21st century Digital Age and rabbis must come up with a new vision for how to market the product that is Conservative Judaism. And to complicate matters, the transition is ongoing. Rabbis have finally embraced the fact that they have to give out their cellphone number to their congregants who also expect a response to their email within an hour. And rabbis slowly began to see the need to upload their sermons and classes onto the Web as podcasts. But now these rabbis need to Facebook chat and blog and Skype and tweet and check-in. Will it ever end? No. We must continue to adapt and make our vision and approach fresh.

The opportunity for fifty-year-old puns is clearly over. The future of Judaism is now.