The Minnesota Twins have never played the New York Mets in a World Series, but when it comes to having Kosher food at the ballpark the Twins win.

Kosher Sports Inc. had been the exclusive Glatt Kosher provider at Shea Stadium, the former stadium of the NY Mets, since 2006. In 2008, the and Kosher Sports Inc. announced a multi-year agreement for the kosher concession company to continue as the exclusive Glatt Kosher concessionaire at Citi Field, which opened in 2009. However, things haven’t gone so smoothly in this agreement.

Kosher Sports Inc. says its contract with the Mets allows it to offer its kosher food at every game at Citi Field, the New York Daily News reported. The Mets’ management, however, issued a ban on sales during the Jewish Sabbath — between sundown Friday and sundown Saturday. This is likely the first case of a Major League Baseball team being more strict on kosher standards than a kosher food supplier. (There are of course those who would contend that a Jewish person attending a baseball game and purchasing food there on the Jewish Sabbath may not be that punctilious about the kosher laws.)

So, the case was all set to be heard by a federal judge who was to decide whether a vendor can sell kosher food during Mets games on the Jewish Sabbath. However, that federal judge had to recuse himself from the case because he was seen wearing a Mets baseball hat during a break in the trial and once wore a necktie with the Mets team colors during the trial.

Things seem to be going much more swimmingly in the Midwest. Kosher food will be offered at Target Field for the first time. In Target Field’s second season as the Minnesota Twins’ home field, fans will be able to purchase Hebrew National hot dogs and all the fixings from a strictly kosher card behind home plate. 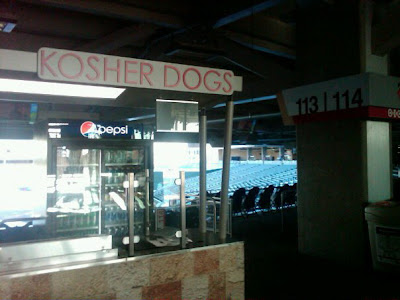 The Star Tribune reports that “The cart will still be open Fridays and Saturdays but won’t be supervised.” I’m glad to see the Twins organization is not causing the same ruckus that led the Mets to a courtroom where Kosher Sports is seeking $1 million for breach of contract.

Congratulations to Rabbi Olitzky for bringing kosher hot dogs to the ballpark in Minnesota and to the Minnesota Twins for not messing up a good thing.