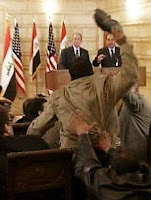 By now everyone has seen the video footage of an Iraqi journalist throwing his shoes at President Bush. The public has treated it as an uproariously funny video clip perfect for YouTube. The president even laughed it off as something not unlike a heckler at a rally. However, the symbolism of the act is much deeper than that. 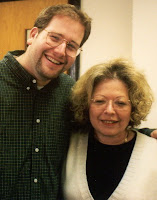 Enter my favorite Hebrew professor from my rabbinical school days at the Jewish Theological Seminary to bring some scholarly explanation to this act. Prof. Edna Nahshon (right), associate professor of Hebrew at the Seminary, is the author of a new book titled Jews and Shoes.

She is quoted in yesterday’s Chicago Tribune, in an article humorously titled: “If the shoe fits, duck.”

[Edna Nahshon] said what appeared to be an impulsive caper was really a symbolic act of defiance. “The insult is of such magnitude that Muslims understand and Americans don’t want to,” she said. “It looks more like a prank, like a stupid thing to have done … I think it was intended as a very serious humiliation. It is understood as such.”

After all, there’s a reason why Muslims remove their shoes when they enter a mosque to pray. It was not initially a Muslim tradition until the Angel Gabriel reportedly appeared before the Prophet Muhammad and instructed him to remove his shoes while communing with God. Not to mention, shoes are downright dirty.

“Shoes are considered [by Muslims] the truly filthy, defiling item,” said Nahshon, an associate professor of Hebrew at Jewish Theological Seminary. “Anyone who has looked at images of the war in Iraq, shoes come up again and again.”

Remember images of Iraqis pelting the toppled statue of Saddam Hussein with their shoes? And just a few weeks ago, an effigy of Bush was hung where the statue used to be. Iraqis didn’t stone it. They “shoed” it.

So, what appeared to be a funny prank (like Bill Gates getting a cake in the face) actually was a strong political message. Or perhaps the Iraqi journalist saw video of President Bush doing an African tribal dance without much rhythm and just wanted to provide him with some “sole”.