Skip to the content
Originally posted at Kaplan’s Korner: On Jews & Sports. Thank you to Ron Kaplan, of the New Jersey Jewish News, for asking me to guest blog on this topic for Kaplan’s Korner.

The Takeaway from Tiger’s Triple Bogey

When it was first reported that Tiger Woods was injured in a single car crash on Nov. 27, many suspected there might be more to the story. This was based on the fact that no one would believe that Tiger’s wife was simply testing the durability of the SUV’s windows with Tiger’s Nike driver. 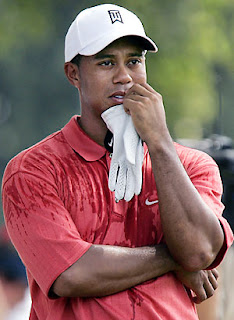 Now, after days of refusing to come clean to the media about any personal indiscretions, Tiger Woods has admitted to marital infidelity. Like the public confessions of adultery often made by disgraced politicians, there will be those who argue this is a personal matter that should remain within the confines of the Woods family, as well as those who take the side that celebrities’ dirty laundry is to be aired in the free-for-all that is the public domain.

Tiger is a mega-celebrity and there’s no way around his private transgressions becoming public fodder. That’s the downside of celebrity. It sort of makes you wonder why “Average Joe’s” like the Balloon Boy’s dad, the White House party crashers, Joe the Plumber, and reality TV wannabes would really want to put their life in the spotlight. I’m sure Tiger learned long ago that fame and fortune would follow from his extraordinary talents on the golf course, but that the downside would be that his private life would no longer remain private. His lapses in judgment, while no worse than many a common man’s, would be the headlines on the covers of newspapers, websites, and tabloid magazines. Certainly, one lesson he has learned as a result of this event is that he really does need a press release for private matters. The public will fight until the story is revealed and that means no celebrity is free to take the Fifth when the media come calling.

No matter what your opinion of whether the media — and therefore the public – should allow Tiger Woods and his wife some privacy to deal with their “issue,” the fact remains that his adultery is now part of the public discourse. So, what is there to be learned from his mistake? Much like the time a decade ago when our president admitted his disregard for his marital promise of monogamy, the public will be discussing the issue of adultery yet again.

From the Jewish perspective, adultery is clearly a sin; the seventh commandment prohibits adultery. Judaism unambiguously categorizes marriage as a holy act (kiddushin in Hebrew).

In Genesis, Joseph admonishes his seductress, Potiphar’s wife, telling her that adultery is a sin against God. Perhaps the most well known act of adultery recorded in the Torah is when King David bedded Batsheba, the wife of Uriah the Hittite. That act led to the tragic murder of Uriah at the hand of David.

Adultery truly begins a slippery slope of negative actions. It leads to additional lying and cheating through denial. Furthermore, adultery never ends well because it is usually several people who get hurt.

We live in a time when the magazines in the checkout line portray celebrities as “just like us.” These icons supposedly grocery shop like us, drink their morning coffee, ride their bicycle, and yell at their kids in the park just like we do. They have lapses in judgment just like us, too. But of course, they are much different than us in reality because the average guy doesn’t have to issue a press release when he’s accused of cheating on his wife.

It is indeed sad that the greatest golfer in the world can’t keep his private affairs from the eager claws of the TMZ generation, but that’s just the dark side of life in the spotlight. Poor Tiger is desperately trying to fight his way out of the toughest sand trap he’s ever faced and we wish him well. But that doesn’t mean we can’t learn something from his ordeal.