My grandmother sometimes complains about charitable organizations. She’s a very generous woman who donates to many charities, but she often gets frustrated by the amount of solicitations she receives. With each complimentary pen, notepad, wall calendar, or other complimentary gift sent in the mail (so she’ll remember to donate again), she remarks that these organizations would be better off saving their money and using it to fulfill their mission. She also expresses angst when a solicitation envelope arrives only days after she already sent in a contribution.

No matter how many times I explain the way the technology works and that the solicitation envelopes and form letter requests come automatically, she still complains about the constant barrage of “asks.”

I’m sure she’s not the only donor who feels overwhelmed by the endless mail (and email) solicitations.

A new product, created by Nadanu Technolgies, takes charitable giving into “Tzedakah 2.0” and just might put an end to the old-school methods employed by non-profits to remind their donor base to send money.

Imagine if you could automatically add eighteen cents each evening to your kitchen charity box without having to think about it on a daily basis? Or, when you’re sitting in a restaurant and overhear the kids at the next table talking excitingly about their Jewish summer camp, you decide to donate $50 toward a child’s dream summer. Or, you hand your cellphone to your child and ask them to drop some change in a virtual piggy bank to benefit the charity of their choice.  This is all possible now.

Nadanu provides services, technology and solutions for integrated desktop, Web and mobile e-Charity donations. Based on the ancient Sumero-Akkadian word for “giving,” Nadanu specifically chose this word to represent its company and philosophy. As Abraham, a common father of Judaism, Christianity and Islam spoke this language, so Nadanu seeks to unite all people regardless of faith, creed and belief into a powerful force for making the world a better place for all.

Nadanu offers three different applications (eCharityBox for Jewish and secular charities, eOfferingPlate for Christian charities, and MyCharityBox) that allow donors to contribute on their own terms in a fully-secure fashion via a range of payment solutions, including Authorize.net and Paypal. When their virtual box is “full”, the credit card on file is charged and an automated tax receipt is sent. 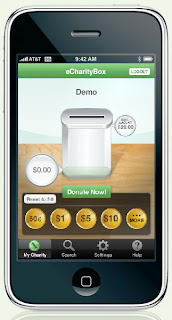 I spoke with Getzy Fellig of Nadanu Technologies on the phone before Passover, at a time when many in the Jewish community were being asked to give to “ma’ot chitin” funds for those less fortunate during the holiday. He explained that Nadanu in general, and eCharityBox in particular, “introduces a method for micro-giving. Today, a lot of younger people are touched by tough economic times and the job market’s not what it used to be and they can’t open their wallets like they did in the past.”

The eCharityBox is user friendly and allows donors to give when the moment arises. This could certainly be a killer app for non-profits in the sense that it allows the people who care about the organization to carry around a virtual pushke (charity box) in their pocket. If they pass by a homeless person on the street, they may choose not to drop a dollar bill in their cup but may pull out their phone and add an $18 gift to their local food bank. There’s something impulsive about that type of charitable giving.

This app, soon available on the iPhone, will be a game changer in the world of Jewish giving. “Organizations can’t afford not to have a presence on people’s cell phones. You never know when the moment will arise,” said Fellig. Now, if only these organizations would stop sending the free pens and calendars.