A few years ago, several local Metro Detroit Jewish organizations began giving out bumper magnets (bumper stickers 2.0?) to promote their organizations. I had collected a number of these and thought it would be funny to affix them all on the back of my wife’s minivan’s bumper for a photo. I Photoshopped a personalized Michigan license plate that read “Rabbi J” and then posted the photo to my Facebook page. A couple week’s later learned that it had been the opening for a sermon delivered by my friend and colleague, Rabbi Paul Yedwab of Temple Israel in West Bloomfield, Michigan. It’s a wonderful D’var Torah on this week’s Torah portion, Parshat Vayera, and I thought I would post it here for others to enjoy and learn. 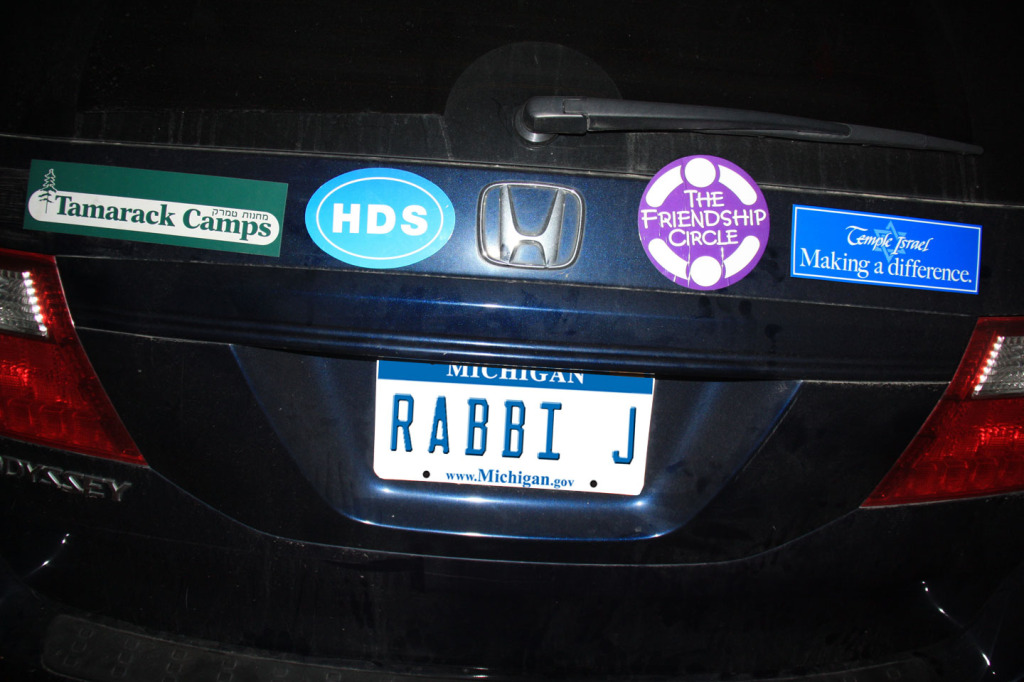 I think I was led to read the Torah in this way this week by some interesting new research that has been done recently into the field of language and epistemology. This researcher claims that language does not follow the development of thoughts, as was previously believed, but that in fact, language creates the thoughts—indeed is the thoughts. That, as babies we have islands of understanding and perception in our brains that can only be connected when we learn the words that tie them together. So we may understand the concept blue, for instance, and ball, and door, and left, but it is only words which help us to link the concepts so that they become useful thoughts. “Oh,” says the toddler to himself, “my favorite ball is to the left of the blue door.” And off the happy toddler goes to retrieve it, and probably throw it at the poor dog sleeping peacefully over in the corner minding his own business.

But I must say, I have a different angle on language. Unlike this researcher, I do believe that thoughts, perception, reality and truth are there within us independent of language–that we have thoughts that go beyond words. We have, for instance, a sense of proprio ception — an innate understanding of our place in space. We have what you might call spatial relations. Imagine a cube in your mind with a red panel on the side. Now imagine another cube off in space with a blue panel. Can you bring the red and blue panels together in space? Spatial relations, you see, do not necessarily require words. Some people can just see the parts of a machine or an electric appliance or a piece of children’s furniture that has to be assembled out of the box and can immediately understand how all the pieces are supposed to fit together without reading the instructions. I am not one of those people of course, but I am told they do exist. These people are spatial rather than verbal in their orientation and words are hardly necessary.

Or take music as another example of thought which does not require words. A niggun can communicate a feeling or even an idea or a state of mind. No words are necessary and yet feelings are conveyed.

Now God knows, I am a verbal person. I see the world very much through words, ideas and concepts. And yet, after 25 years in the rabbinate I have come to understand that my words are one-dimensional labels for reality, and therefore they are generally poor conveyors of truth.

I recently was told about the disappointment that a member of the temple felt after a hospital visit that I made years ago. “You went in,” the husband confided in me, and you said ‘I know this must be difficult for you’. But rabbi,” he continued, “she didn’t want to be reminded how bad things were; she already knew how bad things were. She wanted to be cheered up!”

The truth is, what I probably really wanted to express, as the illness was quite serious, was that I felt helpless. “I would cure you if I could,” I would have liked to say, “but all I can do is pray and that just does not seem enough.” Words, you see, are sometimes inadequate. And that is because they are one-dimensional. Feelings, however, like God, are infinitely dimensional.

So, in preparation for this evening, I have developed some rules for communicating with our necessarily insufficient words; suggestions that I think may help us communicate more directly and successfully, especially in times of stress or difficulty.

The first is: Actions are more powerful than words. Do the right and loving thing and there is at least a decent chance the other person will hear you.

Second. Stop communicating in cyber-space. Never say anything more emotionally charged than “What time is dinner?” or “Where do you want to hold the meeting?” in an email. When you are angry, or excited, write that emotionally charged missive, edit it, rewrite it again, and then drag it into the trash icon on your desktop.

Then pick up the phone and make a phone call but even then, don’t talk about the emotion-laden issue. Phones are sometimes even worse than email as you can hear the words but without the physical cues. Instead, if possible, set a time to meet and talk in person so that you can see one another’s expressions, touch hands perhaps or finish with a hug. Anything powerful must be said with your whole being and that includes your hands and your arms, your face, your eyes and your smile.

And finally, listening is more powerful than talking. I am not sure, but if I had gone into that hospital room and just said nothing, and waited to hear from the patient how she was doing, things might have gone much better when later in the conversation I said, “This must be difficult for you.”

And finally, if you are on the receiving end of some inappropriate words, as you will surely be, try to walk around with a translator box in your head. People, especially at times of loss and difficulty, will say the silliest things, the most hurtful things, the most clichéd things. We can’t help it. We are human beings who want to help but don’t do well when we are feeling powerless, and so we gab away, sometimes inanely. Take that gibberish and simply translate it into a gentle hug and a friendly smile, because generally, that is what people are really trying to say. That is what they really mean and would communicate if they were not constricted by these inelegant labels we call words. That is what they would want you to understand, if you could look directly into their hearts and know them as holistically and multi-dimensional as God understood Isaac in our Torah portion.

So friends, this had been my lesson from the Torah portion this week whose label is Vayera, but whose truth is so very much more than any label could ever convey.