Jewish humor has always been one of my favorite topics to teach. I’ve taught classes about Jewish humor and Jewish comedians to teens and adults at many different settings including synagogues, Jewish camps, and on college campuses. As an aspiring stand-up comic, I have always been interested in the history of Jewish humor, what makes a Jewish joke funny, and why there have been so many successful Jewish comedians throughout the generations.

A sketch on last night’s episode of Saturday Night Live (SNL) provides much food for thought about Jewish humor. The SNL sketch parodies a lavish bar mitzvah for the nephew of a Hollywood exec that has performances by Taylor Swift (played by Gwyneth Paltrow), Jay-Z and Alicia Keys, Katy Perry, and Cee Lo Green. Jacob, the uncomfortable bar mitzvah boy, repeatedly claims that he told his father that he would have been content with just a “modest luncheon.” 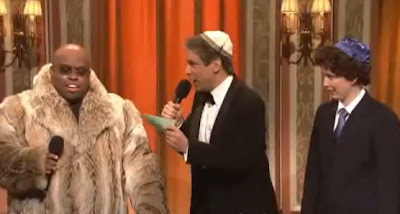 The sketch is funny, but it also relies on some age old Jewish stereotypes that many will claim have run their course and aren’t funny anymore. When it comes to comedy, is everything fair game? I’ve always taught that ethnic humor has to have at least a hint of accuracy for it to be funny. There will surely be those who are offended by the many JAP (Jewish American Princess) references in Gwyneth Paltrow’s Taylor Swift impersonation in the bar mitzvah sketch. Parodying Taylor Swift’s song “You Belong With Me,” Paltrow sang: “She’s in synagogue with her new clear braces on / I’m sittin’ shiva with no mirrors to put makeup on / She doesn’t get your Mel Brooks humor like I do / She wears Macy’s, I wear Loehmann’s. She wears Filene’s and I wear Filene’s Basement / Can’t you see? She’s just a JAP. Not like Japanese.”

Up next performing at Jacob’s bar mitzvah was SNL comic Jay Pharoah (a last name that could be offensive to Jews, but isn’t) appearing as Jay-Z and singing his bar mitzvah version of “New York State of Mind” with Alicia Keys (Nasim Pedrad). He opens with the words, “While we read the Torah / Just to learn the word of God / Straight from Deuteronomy… Rabbi Josh Levi / I’m straight up withcha.” He then utters what I would imagine is the first reference to the Mishnah on late night network TV. Pharaoh (as Jay-Z) then gives a deep reference to both biblical kosher law and the theological perplexity of God’s ego: “Everything ain’t right cuz it’s dirty as shellfish / Don’t defy Yahweh cuz he’s mad selfish.”

As if this SNL sketch couldn’t get any more Jewish (or as Jon Stewart often says: “Jewy”), Jewish SNL cast member Abby Elliott sends up Katy Perry doing her Jewish version of “California Girls.” She enters with “Hi everybody, happy Jewish!” and then busts into the lyrics “Jacob just read from the Haftorah / Let’s all dance the Hora… Ashkenazi Jews they’re so incredible / And Sefardic Jews are cool too / West Bank represent despite your violence… Shalom you guys.”

Next, Cee Lo Green enters the bar mitzvah party in a giant fur coat singing his “F.U.” song, but with lyrics about the Hebrew language and how it sounds like gargling. He’s introduced by Jacob’s father who believes Cee Lo Green’s a “member of the tribe” based on his last name, but then says, “Or maybe not.” Referencing the ongoing joke about the older kids at the bar mitzvah party bending the metal forks, Cee Lo Green says, “What’s with this bending forks thing? I mean, that’s straight up meshuganeh man!” Something tells me that Lorne Michaels and Andy Sandberg had a bet to see if they could get Cee Lo Green to say something Yiddish.

The full video of the SNL bar mitzvah sketch is below. I will use it next Monday afternoon when I present a lunchtime discussion about Jewish humor at Temple Israel in West Bloomfield, Michigan. Aside from the question of appropriateness of some of the JAP jokes at the beginning of this SNL sketch, what is so interesting is that Jews only account for about 2% of the U.S. population and yet SNL devotes so much of its show to esoteric Jewish references. And this isn’t an isolated example either. On Thursday night, Conan O’Brien joked that the new Disney theme park in Israel wouldn’t use the nickname “The Happiest Place on Earth,” but rather “It Could Be Worse.” Conan then spent a couple minutes showing off his impression of a Jewish person. On Comedy Central’s “The Daily Show,” Jon Stewart also makes not-so-subtle references to Jewish themes on his show. Last week on one of his shows, he compared the members of Congress coming up to the microphone on the first day of the congressional session to read a line from the Constitution with “the dramatic chops of family members who demand to be called to the bimah for your bar mitzvah.”

I’m not sure if the Jewish writers on SNL thought Purim was much closer than it actually is, but I will say that they did a great Purim shpiel last night.