It’s hard to believe that Hurricane Katrina occurred five-and-a-half years ago. I traveled to New Orleans in 2007 with other rabbis to help in the cleanup effort and spent two quick days there this past August when I was the keynote speaker at the Alpha Epsilon Pi (AEPi) Fraternity Convention. It was impressive to see how New Orleans has returned to a great city thanks to the hard work of its people.

This Shabbat, the Jewish people all over the world will read Parashat Beshalach, the section of the Torah narrative in which the Israelites walk through the water of the Reed Sea. When I returned from New Orleans in 2007, I spoke about the experience on Shabbat Beshalach. I am reposting those words below and congratulate the great people of NOLA for navigating their way through the disastrous waters of Katrina.

NOLA: A Story of Hope and Rebirth

There was a part of me that was curious. Perhaps curious in a similar way as I was in 2001 following September 11th when I wanted to see the aftermath of the disaster. There was a natural desire – a sense of inquisitiveness – in wanting to see Ground Zero. I had seen the news footage of New Orleans after Katrina hit in August 2005. I watched Spike Lee’s documentary, “When the Levees Broke” about the Lower 9th Ward’s ravishing after the flood. I wanted to see it for myself.

Unlike 9/11 when I was, as we say in Hebrew nogeah badavar, very much connected to the tragedy, since I was living in New York City, about to leave for a year of study in Israel, and found myself stuck in Chicago where I was visiting friends and unable to return to Detroit where my wife was at the time. When Katrina hit I was thousands of miles away from the U.S. I learned about the storm a couple of days after it hit when I turned on the T.V. in my hotel room in Kiev. I had been traveling throughout Ukraine with some of my university students and no one seemed to know anything about Katrina yet. I felt removed from the situation because I was. 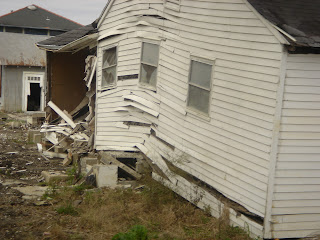 So, for the past year-and-a-half I had a strong desire to become more connected to the situation. Further, I felt that it was a travesty that Katrina was so far from our minds this many months after the fact since it wasn’t a hot enough story anymore for the evening news or the 24/7 cable networks. There was a feeling deep inside of me that I had to find out what I could do to help. And to see it with my own eyes.

Touring the worst hit areas this past week, as part of a Rabbinical Assembly Mission to New Orleans with thirty-five other Conservative rabbis, there were many thoughts running through my head.
Miracles. I thought of the difference between keriat yam suf and bekiat yam suf. Keriat yam suf is the miraculous feat of God to separate the waters of the Sea of Reeds. When Moses held his staff high in the sky, there was a strong wind that forced the waters to recede so the Israelites could cross the sea escaping from the pursuing Egyptian army. But there was also bekiat yam suf – the water crashing back down on the Egyptians who like the Israelites were children of God, part of God’s creation.

I thought of the many theological conundrums presented by Katrina. Returning to my own conception of God and God’s role in the world, I considered the hurricane from God’s point of view. Did God feel powerless watching His children perish in the flood? Did God resent those who didn’t flee for higher ground? Was God frustrated by those who believe Him to be omnipotent and questioned why the All Powerful was not taking advantage of that power? Was God disappointed by those who erred in catastrophic ways by not repairing the levee walls years ago when it was determined they would not withstand a storm of this magnitude? Was God distraught by the horrific criminal acts of many in the days and weeks following Katrina?

I thought about divine justice. How could a student of the Bible not consider the narratives of Noah, of Sodom and Gomorrah, of the generation who constructed the Golden Calf. No human beings seem deserving of the devastation that was wrought on the victims of Katrina. No doubt there were those arguing that New Orleans was a city of strife, of sin, and of moral debasement.

But I also thought about faith. Who were the victims of Katrina? Who were the ones working toward revitalization and a potential renaissance? What gave them the courage and the conviction to rebuild? I thought about Hugo Kahn, the leader of our incredibly powerful tour of New Orleans. Hugo is a past president of the New Orleans Federation and very active in the Conservative shul, Shir Chadash, where his wife is the president.

Everyone in the shul sang Mr. Kahn’s praises and told us that were it not for the Kahn’s, the day school in New Orleans would not exist. A refugee from Kristallnacht, he was raised in Omaha and became an accountant. He ran a major department store in New Orleans for many years and he told us how the store supported many projects in the community. He is currently on the Finance Committee of the Federation helping to figure out how to cover the $4 million deficit of the Jewish institutions in the community due to Katrina. He was “resurrected” into service because so many in the Jewish community have left New Orleans.

What gives people like Hugo Kahn the faith to persevere? He survived Kristallnacht as a child and could have relocated last year with his wife to many Jewish communities around the country. But his faith drove him to return to New Orleans and to lead the rebuilding effort.

As I toured the area, I also thought about water. How could I not think about water? It was all around us. From the Mississippi River to one side and from Lake Pontchartrain on the other. I learned about canals, levees, and deltas. I learned that New Orleans is basically a bowl that filled with water. I thought about how the Torah is compared to water. Moses proclaims: “May my teaching drop like the rain.” Both rain and Torah descend from the heavens and provide relief to the thirst. Water is the source of life – deprived of water; a person will become dehydrated and ultimately disoriented. But here, I realized, it was water that was the source of death and destruction.

I also spent some time thinking about responsibility. There’s a part of me that wants New Orleanians to move on and not focus on whose fault Katrina was. Was it the responsibility of the Federal Government tasked with the building and maintenance of the levees? Was it the responsibility of the local government to have better prepared for the storm? Should the evacuation efforts have run more smoothly? Should there have been better civil order maintained by local law enforcement? Should the local residents have been more responsible with their own safety and survival?

There were many, unfortunately, who didn’t recognize they were being saved and brought to safety. They made their own mistakes by not taking responsibility for their own best interests. I was reminded of the old joke about the guy standing on his roof while the flood waters swirl around his house? He turns down a rescue helicopter, a Coast Guard boat, and a raft, insisting God is going to save him. He dies and goes to heaven, and asks God why He didn’t save him. God says, “I tried. I sent a helicopter, a boat, and a raft…” “The Lord helps those who help themselves.”

Our scholar-in-residence for the mission, my colleague and teacher Rabbi Gordon Tucker, opened the mission with a text study session about the mysterious manna that our ancestors ate in the desert. Through several midrashim found in the Talmud, we learned that the Israelites didn’t have to work very hard for this food that rained down from heaven each day. There are many stories told about this manna including the fact that there was actually home delivery. The manna would essentially be delivered right to your door – the same helping each day. In fact, Rabbi Tucker taught us that upon eating the manna, which would taste like anything you wanted, there was no excretion. He compared this to infants who are also not concerned about excretion because they don’t have to be. The Israelites were babied. They were given what they needed and didn’t have to work for it.

This all changed, of course, in the time of Joshua when our ancestors had to sweat and toil to create a land and a community. They had to fight and they had to be more responsible. The people of New Orleans will now have to sweat and toil to rebuild the city. I can tell you that from what I witnessed, there is a lot of work to be done. They cannot, and should not, have to do it alone.

Shutafo. We were partners with the Holy One Blessed Be God in seder beriat ha’olam – the creation of world. We are now shutafo, partners with God in Tikkun Olam – trying to repair our severely damaged and fragile world. We need to be shutafim with the people of New Orleans. We have to remember that there are many down South willing and able to hammer their homes back together. They might just need us to give them the hammer. There are many who are dedicated to starting new schools, they might just need us to show them how to teach. There are many who desperately want to get back on their feet and start new jobs. They just might need the financial assistance to take the first step.

We will benefit because the people of New Orleans are a people with soul. New Orleans is a city with soul. Tuesday night following a lecture, we headed to the Maple Leaf Bar in the Carrollton neighborhood of Uptown New Orleans. The Maple Leaf is one of oldest and most beloved music clubs in New Orleans. We were blessed with the opportunity to hear the true New Orleans sound of the Rebirth Brass Band. The 10:00 pm show finally began at 11:30 pm, but it was well worth the wait. It was loud and it was soulful!

After the concert, my colleague and friend, Rabbi Daniel Schweber wrote in his journal that “the music experience demonstrated to me first hand that New Orleans’ soul is worth preserving. In Judaism we do not make a big distinction between the body and the soul. It is the body and soul in tandem that make the person who they are. The same is true with New Orleans. New Orleans is made up of its soul dwelling in the body of the Mississippi Delta. I came to the realization that if we are going to preserve New Orleans’ rich culture then we have to preserve and rebuild the body, the physical city itself.”

May we all come to see what I saw this past week. In New Orleans, there is much hope amid the suffering. There is faith amid fear. We, as American citizens and men and women striving for justice in the world need to help New Orleanians see the possibilities amid pessimism.