As a Conservative rabbi and a member of the Rabbinical Assembly, I cannot officially consider Jewish descent to be determined patrilineally (from the father). In fact, in its “Code of Professional Conduct,” the section detailing the responsibilities for membership in the Rabbinical Assembly lists four current standards of religious practice. The first is: “Matrilineality determines Jewish status.”

And yet, like many Jews who regard Jewish status to require a Jewish mother or proper conversion, I admit to feeling pride when a Jewish athlete or celebrity is successful, even if their “Jewishness” isn’t technically defined by halachic standards. After all, when major league baseball player Ryan Braun won the National League Rookie of the Year award in 2007, should the Jewish community have refused to claim the “Hebrew Hammer” as one of our own since only his father is a “Member of the Tribe?” Braun considers himself to be Jewish and his Israeli-born father lost most of his family in the Holocaust.

The 1983 decision by the Reform Movement to recognize Jewish status by either the mother or the father continues to raise questions for the other streams of Judaism. The debate over “Who is a Jew” is back in the headlines following the shooting in Tucson, Arizona that critically injured Rep. Gabrielle Giffords. For Giffords, the daughter of a mother who is a Christian Scientist and a father who is Jewish and the grandson of a rabbi, there is no question of her Jewishness. She is a proud Jew who is an active member of her Reform congregation. She was married under a chuppah (wedding canopy) by a rabbi, albeit to a non-Jewish man.

This week, as Giffords lay in a hospital recovering from being shot in an assassination attempt by a domestic terrorist, her Hebrew name has circulated the world to be used in the traditional Mi Sheberach prayer for healing. Some rabbis have even questioned whether her non-Jewish mother’s name should be part of her Hebrew nomenclature for the prayer, while others have referred to her as Jewish but added the caveat “not halachically speaking.” Giffords co-chaired the Jewish Outreach Institute’s 2007 conference and is active in her congregation. Yesterday, President Barack Obama called Rabbi Stephanie Aaron, Giffords’ rabbi at Congregation Chaverim, to offer his prayers for a speedy recovery for the congresswoman. 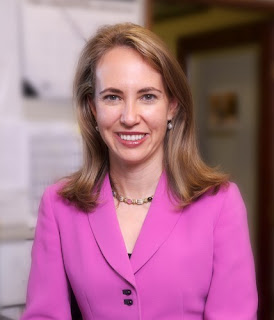 Since Saturday’s shooting, we’ve learned quite a bit about Gabrielle Giffords and her Jewish pride. Her paternal grandfather, the son of a Lithuanian rabbi, changed his name to Giff Giffords for anti-Semitic reasons. On her campaign website, Giffords wrote, “Growing up, my family’s Jewish roots and tradition played an important role in shaping my values. The women in my family served as strong role models for me as a girl. In my family, if you want to get something done, you take it to the women relatives! Like my grandmother, I am a lifetime member of Hadassah and now a member of Congregation Chaverim. When I served in the State Senate in Arizona, I had the opportunity to visit Jerusalem. It was one of the most memorable experiences of my life. I will always be a strong supporter of Israel. As the only functioning democracy in the Middle East, Israel is a vital strategic ally of the United States. As a woman and as a Jew, I will always work to insure that the United States stands with Israel to jointly ensure our mutual safety, security, and prosperity.”

The Jerusalem Post was the first publication to state emphatically that Giffords’ Jewishness shouldn’t be questioned. In fact, in their editorial “Learning Judaism From Giffords,” they wrote, “With all our desire for a universally accepted definition of ‘Who is a Jew?’ that would unify the Jewish people, we cannot ignore the complicated reality that many ‘non-Jews’ are much more Jewish than their ‘Jewish’ fellows. Congresswoman Giffords is one of them.”

In her “In the Mix” blog at The Jewish Week, Julie Wiener wrote of how Giffords’ Jewishness is shining a spotlight on the “who is a Jew” debate. In her article, “Plight of the Patrilineals,” Weiner cited blogger “Kung Fu Jew,” who posted his angry rant on the JewSchool blog about how Giffords is “Jewish enough for the Jewish community to own a side-show of the media circus. Jewish enough to be our martyr, it seems, but not Jewish enough to be treated equally in life.” He has a point here. I’m sure many synagogues will offer prayers of healing for Rep. Giffords this Shabbat and recognize her as a Jewish member of Congress, yet they would be violating their own religious policy if they ever called her to the Torah for an aliyah honor.

I really wish we had a consensus on what determines Jewish status through lineage, even if only in the non-Orthodox Jewish community. Certainly, we cannot continue to make an exception for athletes, celebrities, and politicians of Jewish patrilineal descent. I’m in agreement with the Jerusalem Post on this matter. If Rep. Gabrielle Giffords considers herself Jewish because her father is Jewish and she lives a Jewish life, then she’s Jewish.