Just because LeBron James started meeting with a rabbi this summer doesn’t mean he’s ready to be dispensing theological statements.

I’ve been thinking a lot about LeBron’s statement via his Twitter feed last week about the Cleveland Cavaliers’ huge upset to the Lakers. In what has become known as the “Karma Tweet,” LeBron tweeted the following during the final minutes of his former team’s 55-point loss to the Los Angeles Lakers: “Crazy. Karma is a b****.. Gets you every time. Its not good to wish bad on anybody. God sees everything.” 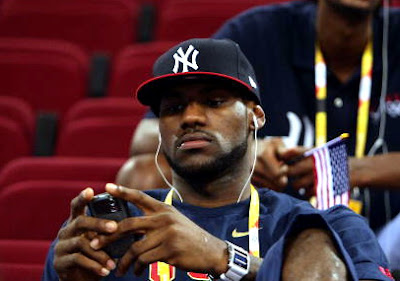 There are many unknowns when it comes to theology. Aside from dealing with the conundrums of evil and suffering in the world, we really don’t know whether God is omniscient. Apparently, LeBron James is certain of God’s omniscience (“God sees everything”). Not only that, but it seems that LeBron’s God metes out justice on those who “wish bad on anybody.” Now, I’m not going to judge LeBron for his theological certainty or even for his brashness in tweeting these words. I am, however, going to call him out for the senselessness of tweeting about divine karma this way.

That tweet couldn’t possibly have been received well no matter what happened. LeBron handled his separation from the Cavaliers in the worst way imaginable, so criticizing owner Dan Gilbert or the Cavaliers for wishing ill on him is ridiculous at best. Second, LeBron’s “Karma Tweet” sets him up for ridicule should the karma now fly the other way, which is exactly what has happened. Since LeBron decided to wax theological on Twitter, his team — the Miami Heat — has lost three consecutive games on the road and has seen the three superstars all get injured (twisted ankles for LeBron and Chris Bosh, and a hurt knee for Dwayne Wade).

This only proves that if you believe in the divine karma LeBron believes in, well, it can cut both ways. And if you ever sense that, thanks to karma, bad things are being levied on those who wished ill on you, be smart about it and keep your mouth shut. And in this day and age, that means stay away from Twitter!