Those who have their finger on the pulse of the gastronomic culture in the Middle East know that hummus is a food that should bring Arabs and Jews together, not divide them. In Adam Sandler’s movie “You Don’t Mess with the Zohan,” hummus was the butt of several jokes. The Zohan (played by Adam Sandler) dips everything into hummus, eats it at every meal, feeds it to the dog, and even brushes his teeth with hummus. In the movie, hummus is used to douse the flames of a fire and as a hair care product too. 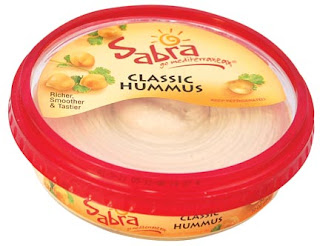 Both Arabs and Israeli Jews are obsessed enough with hummus that it should be a food that is used to broker peace in the Middle East rather than serve as a divisive tool. So, it’s a good thing that DePaul University in Chicago announced today that the Sabra brand of hummus will continue to be served in its campus cafeterias, although Students for Justice in Palestine said they will continue the fight against Sabra hummus.

According to the JTA, “the university administration made the decision, announced Monday, following a recommendation of the university’s Fair Business Practices committee and following a nonbinding student referendum last week. The Sabra brand of the chickpea dip had been served until last November, when the pro-Palestinian student group Students for Justice in Palestine objected because Sabra is half-owned by The Strauss Group. Strauss has publicly supported the Israel Defense Forces troops, and provides care packages and sports equipment to Israel’s Golani and Givati brigades.

“While we recognize the original complaint made by DePaul students arose from genuine concerns surrounding the Israeli-Palestinian conflict, in the judgment of the Fair Business Practices Committee there do not appear to be sufficient grounds for a boycott of Sabra Hummus, primarily because the committee did not find evidence that the Strauss Group provides direct military support for units within the Israeli Defense Forces,” the committee concluded.

The student referendum on banning Sabra hummus completed last week ran 1,127 in favor and 332 against, but was deemed invalid since fewer than 1,500 students on a campus of more than 20,000 students voted on the issue.