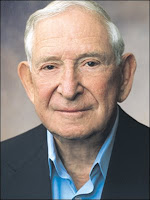 Bill Davidson will be remembered as an innovator in the National Basketball Association (NBA). He was the first owner to fly his team on a private jet (“Roundball One”), sit court-side among the fans rather than in a private box or suite, and purchase a state-of-the-art arena (The Palace of Auburn Hills) with all private funds. Mr. Davidson was also the innovator of the co-branding and sponsorship marketing that has become commonplace inside NBA arenas.

Bill Davidson was not your typical billionaire (according to the Forbes list his net worth totals over $5.5 billion). He could have worn expensive custom-made Italian suits, but he preferred warm-up suits and Members-Only jackets.

His philanthropic reach was enormous. Personally, I found that wherever I traveled on my own educational and professional journey there was Bill Davidson.

As a young student at Hillel Day School of Metropolitan Detroit, I sat in classrooms that were part of a wing that Mr. Davidson named for his children Ethan and Marla Davidson (this was the first renovation of the school’s Middlebelt campus). I studied for my master’s degree at the William Davidson Graduate School of Jewish Education of the Jewish Theological Seminary in New York. As a Jewish educator I’ve been part of continuing education programs in the Metro Detroit area through TEAM (Teacher Educator Advancement Model), a program of the Hermelin Davidson Center for Congregation Excellence. As a staff member of the University of Michigan Hillel Foundation, I worked in a building that was established because of the generosity of Mr. Davidson and many of his friends.

As a rabbi I have led groups in Israel to the Davidson Center for Exhibition and Virtual Reconstruction in the Jerusalem Archaeological Park, Israel’s most important antiquity site in the Old City of Jerusalem which was funded by Bill Davidson.

As a rabbi in Columbus, Ohio I was a guest at a dinner at the home of Les and Abigail Wexner for Jewish communal leaders to meet the newest class of Wexner Fellows and Davidson Scholars. In 2005, the Wexners launched the philanthropic partnership with William and Karen Davidson through the financial support of Guardian Industries Corp. This new partnership established an annual cohort of 10 Davidson Scholars as part of the Wexner Graduate Fellowship.

The Davidson school at the Seminary is a great example of Mr. Davidson’s philanthropic mission. He shared his thoughts about the vision of the school, but then allowed the school’s leadership to lead. He cared deeply about the students at the Davidson school and was eager to solicit their feedback. In January 2005 he invited the Davidson School’s alumni who live in Metro Detroit to his office at Guardian Industries to have lunch and discuss the school, Jewish education in general, and the future of the Conservative Movement (see blog post). It was evident that he did not merely want to endow a school; he wanted to make a significant difference in Jewish education. At the Davidson School it was not uncommon to hear fellow students refer to Bill Davidson as “Uncle Bill”. 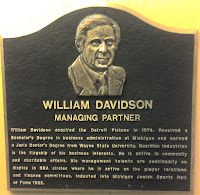 Bill Davidson’s philanthropy was immense. The University of Michigan, Jewish Theological Seminary, the Weizmann Institute, and Technion-Israel Institute of Technology all benefited from his great fortune. In 2007, Mr. Davidson donated the second largest gift ever devoted to a Jewish cause with his $75 million donation to Jerusalem’s Hadassah Ein Kerem Hospital. The hospital tower will be named for Davidson’s mother, Sarah Wetsman Davidson, a longtime Hadassah volunteer leader.

Regarding the Hadassah gift, Jonathan Aaron (Davidson’s assistant and son-in-law) was quoted in the Forward as saying, “Mr. Davidson doesn’t usually fund brick-and-mortar type projects, but here there was the history and the family ties.”

Detroit Free Press writer Mitch Albom summed up Mr. Davidson’s devotion to the State of Israel in his column yesterday. He wrote, “His love for the Jewish community and the state of Israel was unrivaled. As many tears are shed for his death in Detroit, there are likely that many falling in parts of the Holy Land. Davidson, who sometimes got on his private plane in pajamas and flew overnight to Tel Aviv, walked with the biggest names in that country. And his generosity — there, here and elsewhere — will be missed.”

This past December, Bill and Karen Davidson along with Jon and Mary Aaron invited all local alumni of the Jewish Theological Seminary to their suite at the Palace of Auburn Hills to watch the Detroit Pistons play. It was a very generous way for the Davidson family to acknowledge local rabbis, cantors, and educators. But more importantly, it gave all of us a chance to say “thank you” to this wonderful and kind man in his own home — in his Palace. Bill Davidson was a mentsch.

We’ll miss you Mr. D! Thank you for your immense contributions. Our world is a better place because of your generosity, demeanor, and leadership. May his family be comforted with the blessings of his memory.