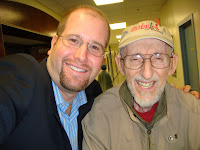 When I was an 11-year-old camper at Camp Maas in Ortonville, Michigan, I had the privilege to be part of the group of campers in Deroy village who designed and built a concrete sculpture. “Priestly Blessing” is an artistic representation of the hands of the kohen (priest) offering his blessing. The artist who led the project was Irving Berg (right), the long-time artist-in-residence of Tamarack Camps.

Irving Berg died on March 21, 2009 at 87. It is impossible to walk around the Tamarack property (1,500 acres) without encountering his sculptures. The Irving Berg Sculpture Garden is one man’s permanent contribution to a Jewish camp. With these sculptures Irv will continue to educate Jewish campers about their heritage even after he no longer walks this earth.

This past summer (2008), I facilitated a scavenger hunt of sorts with the oldest campers at Camp Maas — the Teen Service Staff (TSS). The group of sixty teens who would be entering 11th grade were divided into smaller groups and then sent out in search of some of Irv Berg’s sculptures. They had to decipher the Jewish message each sculpture represents and then report back to the group. Many of the Jewish teens remarked how they had spent many summers at camp seeing these works of art, but never considered the deeper meaning behind each sculpture.

A wonderful tribute to Irv’s legacy at camp was created in Summer 2008. Award-winning animator Gary Schwartz created an animated documentary of Irv Berg’s sculptures. The film can be viewed below.

As the rabbi of Tamarack Camps, I had the distinct honor of officiating at Irv Berg’s funeral. The hesped (eulogy) that I delivered is available online and the obituary is available at the Detroit Jewish News website.