I haven’t written anything on this blog since the end of last year. There have been several topics I planned to cover, but just never got around to the actual writing part of it. I have also been preoccupied recently with my uncle’s condition. My Uncle Jerry, with whom I was extremely close throughout my life, lost his battle to pancreatic cancer on February 21, 2009. He was diagnosed, at 54-years-old, a little more than three months prior.

Pancreatic cancer gets much less attention than other cancers and the research for pancreatic cancer is funded at far lower levels than other forms of cancer even though nearly as many people die of pancreatic cancer as breast cancer. As a result of my uncle’s death, our family has discovered an amazing organization called The Pancreatic Cancer Action Network or Pancan, where we have set up a fund in his memory.

Pancreatic cancer is so deadly because it is difficult to detect, early to metastasize, and resistant to most treatments. Perhaps with several celebrities currently battling Pancreatic Cancer, the disease will attract more attention and funding. Actor Patrick Swayze, former Apple CEO Steve Jobs, and Supreme Court Justice Ruth Bader Ginsburg are all battling the disease. Opera great Luciano Pavarotti and actor Michael Landon both died of pancreatic cancer, as did Prof. Randy Pausch, co-author of The Last Lecture. 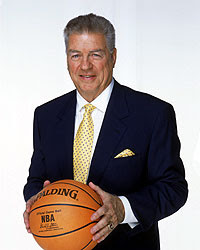 Just yesterday, it was reported that former Detroit Pistons coach Chuck Daly (left), a member of the Basketball Hall of Fame, was diagnosed with pancreatic cancer. The 78-year-old is beloved here in Detroit for leading the Pistons to two NBA championships (1989 and 1990) and a U.S. gold medal in basketball (1992). In addition to being one of the greatest coaches in the history of professional basketball, Daly has always been known as a true gentleman.

I wish Coach Daly the best in his fight against this deadly disease. All I can do is hope that more people, especially our elected officials, open their eyes to this horrific killer and give it more attention and more funding for research. In the meantime, my heart goes out to all those who have lost loved ones to Pancreatic Cancer. I can now, unfortunately, speak from experience and say how devastating the feeling is.