Now that Chelsea Clinton and Marc Mezvinsky have gotten married in Whitebeck, NY, some details of the wedding have been reported. The New York Times reports that the interfaith ceremony was co-officiated by Rabbi James Ponet and Reverend William Shillady. Jim Ponet, a Reform rabbi, is Yale University’s Jewish chaplain. His official title is director of the Joseph Slifka Center for Jewish Life at Yale, which is the campus Hillel there.

The NYT also says that the “family said the ceremony would celebrate and honor elements of both traditions. It would include friends and family reading the [Sheva Brachot] Seven Blessings, which are typically recited at traditional Jewish weddings following the vows and exchange of rings.” 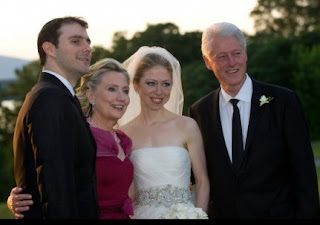 Supposedly a ketubah (wedding document) was also witnessed and signed before the ceremony.

Since a guest list hasn’t been released, I decided to come up with a quick list of people I am certain were not there.