It might be unusual for a grandson to continue a friendship begun by his late grandfather, but that’s exactly what happened.

Ben Gurvitz and his late wife Sara were dear friends of my grandparents, David and Adele Gudes. The Gurvitzes were at all of our family’s life-cycle events. After my grandfather passed away in 1994 and Sara passed away in 1999, Benny and my grandmother became even closer friends, had meals together, and attended events together. I looked up to Benny and loved his humor. He always had a joke, pun or witticism ready to go for any occasion.

Benny was born on 10-10-10. I, like thousands of others who loved him, was eagerly awaiting the tenth of October this year (10-10-10 again) when he would turn 100. Unfortunately, Benny passed away yesterday; just a couple months shy of triple digits. 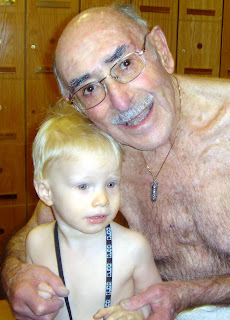 The last time I saw him was two weeks ago. I was blessed to spend an hour with him at Henry Ford Hospital where he was being treated for an infection in his foot. I presented him with a letter from Michigan Governor Jennifer Granholm and an award recognizing him as one of the state’s “Older Jewish Americans.” I nominated him for this award, but he wasn’t able to attend the ceremony in person. Presenting it to him myself, in private, meant more to me than watching the governor present it to him in a room full of strangers. Sitting with him in the hospital room, I saw that his infectious smile and witty personality were still there.

Benny was a fixture in the men’s health club locker room at the West Bloomfield Jewish Community Center and he held court there telling jokes. In the past year, after he stopped driving himself, he would get a ride to the “Center” for a shave and a whirlpool bath. Everytime I saw him there he would inquire about my children like they were his own great-grandchildren (that’s Benny with my oldest son Josh in the photo). He’d ask how my wife, parents, and grandmother were doing. Last year, as my uncle battled pancreatic cancer, Benny and I would hug each other for support with tears in our eyes. He knew my uncle as a little boy.

Seeing Benny everyday in that locker room made me remember my papa. They admired each other. Benny always spoke so highly about my grandfather; especially to other people in my presence. Benny was a mensch.

It’s no doubt that Benny lived as long as he did because of his sense of humor. As his locker neighbor at the Center, Dr. Steven Ceresnie, told me yesterday, “The world’s humor quotient declined sharply today.”

Benny had some funny lines that I heard over and over, but I laughed each time. He would always tell me, “At my age, there’s no more peer pressure. Heck, I have no more peers!” And, “When I was a kid, the Dead Sea was just sick.”

Whenever I asked him how he was doing, he would respond, “I woke up this morning. That’s better than the alternative.” And on occasion he’d tell me, “This is a strange week. Friday the 13th is on a Tuesday.”

Benny also used to say that at his age, God is just a local call. Well, I have no doubt that God will be enjoying Benny’s conversation and laughing at his jokes as much as I did.

In Judaism, on people’s birthday we wish that they live to the age of 120. But let’s be honest, that’s pretty far-fetched even with modern medicine. I think from now on, rather than 120, on birthdays I’ll just wish that my friends live as long as Ben Gurvitz and have as rich and fulfilling a life as he had. Oh, and if they can make those around them laugh even a fraction as much as Benny, the world will be a much better place for all of us.

Here’s a video of the 99-year-old stand up comic. May the memory of Ben Gurvitz (Berel ben Herschel Shlomo v’Sara) endure for blessings.