Skip to the content
I’ve been paying close attention to Gilad Shalit’s first days of freedom from captivity. The debate of whether the prisoner swap was the right choice rages on throughout Israel and beyond, but I’ve become more interested in how he adapts to freedom and how he responds to his new status as a celebrity.

Perhaps what is most notable has been how the Israeli media has treated Gilad and the Shalit family since his release last Tuesday. In general, the news media has respected a 10-day moratorium on intrusion in the town where the Shalit family lives. With the exception of a few photos that were released with the family’s permission of Gilad riding a bicycle and swimming at the beach, there have been no reports of paparazzi-like intrusion into his life during the past ten days. I don’t believe this could have ever happened here in the United States. The American media and paparazzi would have staked out his home 24-7 to get the best photograph of Gilad re-adjusting to freedom in the privacy of his home. Kudos to the Israeli media for being so respectful of this 10-day period.

This video of Gilad Shalit riding his bicycle by his home in Mitzpe Hila was released with permission of the Shalit family:

GILAD’S UGLY SHIRT
I instinctively knew that it wouldn’t take long until humor became part of the Gilad Shalit story. The first real example of this is the now famous “Ugly Hamas Shirt” that Gilad wore when he was released. ynet News first reported that “The Shalit Shirt” has quickly become a fashion trend in Gaza. “The first image of Gilad Shalit out of Gaza has captured the attention of many in Israel and around the world. Shalit was led by Hamas men wearing civilian clothing including a plaid shirt. But while most focused on his gaunt frame, it appears many Palestinians were more interested in his outfit, which became an immediate trend in Gaza.” Stores in the Gaza Strip are selling “The Shalit Shirt” in a wide range of colors for 60 Shekels or about $16.50. There are already several Gaza-based Facebook groups about Gilad’s ugly shirt. 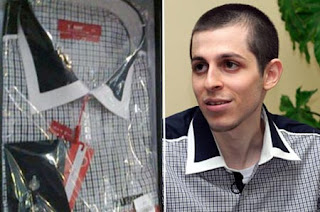 BIBI’S FOREST GUMP MOMENT
It’s unusual for a prime minister to crave the spotlight and sneak into photos because, well, they’re already the leader of the nation and always in the spotlight. However, it really seemed like Israeli Prime Minister Benjamin Netanyahu was doing just that during the reunion of Gilad Shalit and his father. It didn’t take long for the Israeli news media and bloggers worldwide to recognize that Bibi was trying to get his face into the iconic photos during Gilad’s release.

This act of hubris was immediately labeled “Bibi Forest Gump” after the Tom Hanks movie in which Forest Gump was seen in every iconic photo of American history. And then the Bibi Bombs began. People began Photoshopping Bibi’s face into iconic photos like the Begin-Sadat peace handshake, the signing of Israeli independence, Moshe Dayan walking in reunified Jerusalem in 1967, and Saddam Hussein’s hanging. Some even added Bibi to classic movie scenes from such films as Pulp Fiction and Cassablanca. 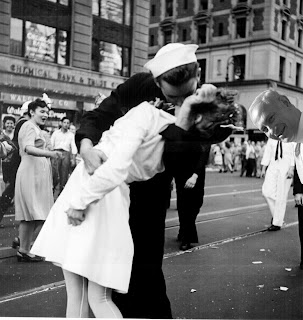 At least Netanyahu had fun with it when, yesterday, he uploaded his own “Bibi Bomb” to his Facebook page. It’s a photo of him addressing the U.N. with a superimposed photo of his face and a speech bubble from his smiling mouth with the text, “Doogri, you made me laugh.” An explanation of Bibi’s photo on Jewlicious says, “The word ‘Doogri’ means ‘honestly’, or ‘straightforward’… Not only did Netanyahu’s own version of the ‘Bibi Bomb’ play on the images circulating online, but it also expressed self-humor at his use of the word ‘doogri’ in his UN speech [when he addressed PA Leader Mahmoud Abbas saying] ‘Let’s talk ‘doogri’. That means straightforward, I’ll tell you my needs and concerns.” 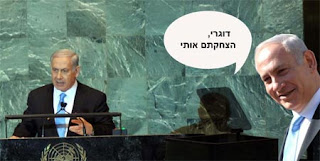 DESTINY OR COINCIDENCE?
There are several notable coincidences with the Shalit release. The haftorah (selection from the Prophets) that was read this past Shabbat morning (Shabbat Bereshit) from the Book of Isaiah includes such lines as: “I have called you to be righteous. I took you by the hand and kept you. I made you into a covenant for the people, a light to the nations, to open the eyes that are blind, to bring the prisoners out of the dungeon, and those who sit in darkness out of prison” (Isaiah 42:6-7) and “Since you are precious and honored in my sight, and because I love you, I will give men in exchange for you, and people in exchange for your life” (Isaiah 43:4).

Samuel Freedman, writing in the NY Times, referenced the story of Sodom (in next week’s Torah portion) in his beautiful op-ed about pidyon shvuyim (redeeming the captives). He wrote, “The timing of this Torah reading is an absolute coincidence, an unplanned synchronicity between the religious calendar and breaking news. Yet the passage also offers an essential explanation, one almost entirely ignored in coverage of the Shalit deal, for Israel’s anguished decision to pay a ransom in the form of more than a thousand Palestinian prisoners, including the perpetrators of terrorist attacks on civilians. The story of Abraham saving Lot represents the earliest of a series of examples of the concept of ‘pidyon shvuyim’ — redeeming the captives, invariably at a cost — in Jewish Scripture, rabbinic commentaries and legal codes. That concept, absorbed into the secular culture of the Israeli state and the Zionist movement, helped validate the steep, indeed controversial, price of Sergeant Shalit’s liberation.”


SHALIT FAMILY’S TENT REMOVED
One of the most emotional moments for Israelis living in Jerusalem was seeing the empty space outside the Prime Minister’s residence where the Shalit family’s protest tent stood for several years. The tent had served as a sign of Shalit’s captivity and a place where tourist groups would visit with the family. The tent was taken down and carted away earlier this week as Israeli President Shimon Peres visited with Gilad at the Shalit family home in the northern Israeli town of Mitzpe Hila.

Debate will continue about whether this was good or bad for Israel. Israeli opposition leader Tzipi Livni, head of the Kadima Party, has now spoken out against the prisoner swap that brought Shalit home, saying it has weakened Israel and strengthened Hamas. Every time there’s an attempted terror strike or bombing, critics will point to the release of the prisoners. However, even the release of one Hamas terrorist in exchange for Gilad Shalit could lead to a future incident.

It’s hard to put a price on Gilad’s freedom. However, watching him ride his bike outside his home and knowing he has visited the beach with his family and played ping pong make it feel worthwhile. Hopefully, Israel’s security fence will do its job in keeping the released prisoners and other potential terrorists outside of Israel. It might be unrealistic, but I’d like to believe that the Shin Bet (Israel’s internal security agency) didn’t release all those prisoners without first injecting some sort of tracking mechanism into their bodies. I jokingly posted on Facebook that Israeli news reported that the Shin Bet provided each of the released Palestinian prisoners with their own complimentary GPS-enabled smart phone so they could always be located.