Skip to the content
There were two funny things about the photos of Ivanka Trump (The Donald’s daughter) and her husband Jared Kushner taken in New York this past week. 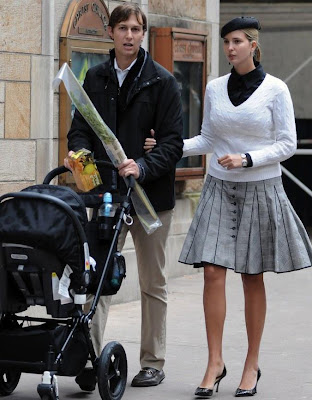 First is the fact that the well-to-do couple wouldn’t be using a fancy etrog holder. As Kushner was pushing their baby daughter Arabella Rose on the second day of Sukkot, he was also carrying a lulav and etrog. One would think that Donald Trump’s daughter and son-in-law would have a nice silver etrog carrying case, but it appears that the Kushner-Trump couple is sporting the simple cardboard box etrog carrying case along with the plastic bag the lulav comes in. 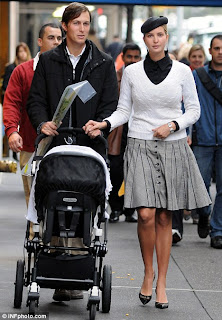 The second funny thing is that the Daily Mail first published this photo over the weekend in its online edition explaining that “Jared, wearing a casual black jacket, pushed little Arabella Rose’s pram along the streets on their way to lunch. He also held some flowers in one hand – perhaps a gift for his wife.” I suppose you could combine a palm branch with some myrtle and willow branches to form a bouquet of sorts, but I don’t think it’s a popular gift for ones wife.

There was no word on where the couple was headed for yuntif lunch or if they had their own sukkah outside of their Manhattan home.

Trump, the billionaire heiress and model, and Kushner were married by Rabbi Haskel Lookstein, who also worked with Trump through her yearlong conversion to Judaism. Kushner is the publisher of the New York Observer.