Skip to the content
Aside from writing about the impact the announcement of the Gilad Shalit-Palestinian prisoners exchange deal had on Twitter last week for the Jewish Techs blog, I haven’t written much about this developing story. There are two reasons for this. First, I feel as though it’s all been said. Second, it’s a very complex moral dilemma.

I posted a simple status update on Facebook this morning, stating “Extremely happy that Gilad Shalit is home in Israel. A captive has been redeemed.” One comment to my post summed up the moral dilemma in a concise way: “It is wonderful that Gilad has been released…but at what cost? Do you think that the 400 murderers/terrorists that have been released will lead honest productive lives? And the 600 more to come in 2 months?” 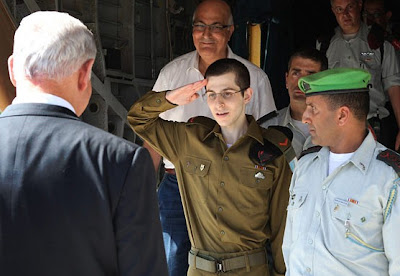 The deal is obviously lopsided because it is 1,027 Palestinian prisoners (many of whom are terrorists and convicted murderers) in exchange for one Israeli soldier who has been held captive for over five years without even access to the Red Cross. Having these prisoners freed and back on the streets should be of great concern to Israel’s security. It also sends the message to Hamas and other terrorist groups that Israel will free prisoners in exchange for captives.

However, it also sends a strong message to Israelis that the Israeli government will do whatever it takes to bring its captive soldiers home. If Gilad Shalit were my son, it wouldn’t matter how many hundreds of prisoners it took to bring him back into my arms. And that’s really why this moral dilemma isn’t a dilemma after all. We just have to put our own children in Gilad Shalit’s shoes and then ask the question.

I remember my high school years in United Synagogue Youth (USY) petitioning the U.S. government to assist in the redeeming of the captive soldiers Ron Arad, Zachary Baumel, Yehuda Katz, and Zvi Feldman. And in more recent years we prayed for the release of other captives as well. So, the video footage of Gilad Shalit’s return to Israel today is cause for celebration. It is a beautiful reunion and one that Gilad’s parents truly deserve after their tireless efforts of the past five plus years.

As we celebrate the release of Gilad Shalit and the fulfillment of the commandment of pidyon sh’vuyim (the redemption of captives) in the middle of the Sukkot festival, we must also pray that Israel is able to protect itself from any terrorism caused by the prisoners it has agreed to release in this deal. At this time of great joy, we must also remember Lt. Hanan Barak and Staff-Sgt. Pavel Slutzker, the two young men who were killed in the same cross-border raid from Gaza into Israel that resulted in the taking of Gilad Shalit. May their memories be for blessings.

For more on the question of the price at which Israel should redeem its captives, see my colleague Rabbi Barry Leff’s blog post.