Skip to the content
As anyone who was paying attention during the recent Yom Kippur services will tell you, one must seek repentance on their own. In Judaism, there are three ways to atone for sins: asking for forgiveness, praying, and giving charity. Nowhere in Jewish law does it say that a friend can ask for forgiveness on your behalf.
That’s precisely what actor Robert Downey Jr. attempted to do on Friday during the American Cinematheque Awards Friday in Los Angeles. Downey Jr. urged the Hollywood community to forgive Gibson for his recent troubles, which include anti-Semitic rants, racial tirades, and spousal abuse. 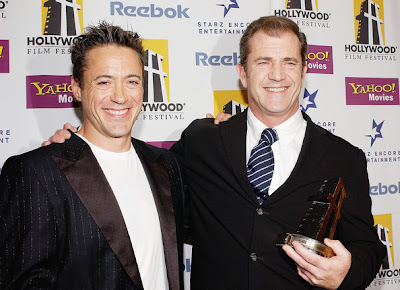 At the annual award ceremony occurring exactly one week after Yom Kippur, Downey Jr. (whose father is half-Jewish) paraphrased the New Testament when he said to the audience that “unless you are without sin…you should forgive him and let him work.” The two actors appeared in the 1990 movie “Air America” together. Downey continued, “I urge you to forgive my friend his trespasses. Allow him to pursue this art without shame.”

At least one rabbi has spoken out against Downey Jr.’s attempts to gain forgiveness from his Hollywood colleague. The Simon Wiesenthal Center’s Rabbi Marvin Hier, said that only Mel Gibson can seek and receive forgiveness for his sins. “The sins between man and his fellow man can only be forgiven if the person who committed the sin asks for forgiveness from those whom he shamed and insulted and caused harm to,” Hier said Monday.

Hier even mentioned that Mel Gibson’s plans to make a movie about Judah Maccabee won’t help his cause either. “”You can’t ask forgiveness indirectly through a movie,” Hier said. “You can’t do it by saying, ‘Look at the part that I have. I’m producing a film about a Jew.’”

In September, the Anti-Defamation League has asked Warner Brothers to remove Gibson from the Judah Maccabee film. Abraham Foxman of the ADL released a statement in September saying, “We would have hoped that Warner Bros. could have found someone better than Mel Gibson to direct or perhaps even star in a film on the life of the Jewish historical icon Judah Maccabee. As a hero of the Jewish people and a universal hero in the struggle for religious liberty, Judah Maccabee deserves better. It would be a travesty to have the story of the Maccabees told by one who has no respect and sensitivity for other people’s religious views.”