Ynet News is reporting that the Israeli prime minister’s emissary to the negotiations for a prisoner exchange deal with Hamas to return the captive Gilad Shalit said “it’s not over yet. The deal reached is pretty complicated, but the most difficult part is behind us.” The former Mossad agent turned Gilad Shalit negotiator, David Meidan, added that he plans to travel to Egypt soon, together with the negotiation team, to plan Gilad Shalit’s return to Israel. 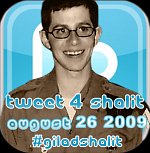 While the deal to free Shalit was orchestrated by high-level Israeli politicians, negotiators like Meidan, and world leaders, there was also an impressive social media campaign spanning the past few years to spread word of Shalit’s captivity through the micro-blogging site Twitter. The hashtag #FreeGilad has long been used on Twitter following any statement or link relating to the cause of freeing Gilad Shalit. As Adam Dickter blogged about yesterday, Gilad Shalit was trending on Twitter moments after news about the deal began to spread.

Dickter wrote at NewsFactorNews: “News of Shalit’s release and the controversial agreement spread quickly around the world, creating a stream of tweets. The hashtag #GiladShalit moved along computer screens almost as quickly today as #SteveJobs did last week, following the death of the Apple co-founder and former CEO. A few days before that, #iPhone5 topped Twitter, when Apple released a new phone that turned out to be the iPhone 4S, not an iPhone 5, as expected.”

In the NewsFactorNews post, Dickter quoted me about the early use of Twitter to promote the Free Gilad Movement:

Rabbi Jason Miller, who writes extensively about the intersection of Jewish themes and technology, said he learned about the deal Tuesday from a New York Times Breaking News alert, and quickly Tweeted it to his 2,357 followers. It was, in a way, coming full circle, as social media have been used extensively to raise awareness of Shalit’s plight. “The hashtag #FreeGilad is one that I have been using for at least three years now,” said Miller. “In fact, it was one of the first hashtags I ever used on Twitter. I’ve also been asked by leaders of the ‘Free Gilad’ movement if I would tweet certain statements at certain times of the year, on the anniversary of his captivity.” “It’s not just news for Israelis or Jewish people, but an international story.”

Dickter also noted that Facebook also offered an opportunity for people around the world to share their thoughts. The Free Gilad Shalit group, which has 107,112 members.

No doubt that the moment Gilad Shalit is back home safe and sound, he’ll be trending in the Twittersphere once again.