While I’m no Jon Stewart or Andy Borowitz when it comes to political satire, I have had the following funny situation playing in my head ever since the riots in Egypt began: 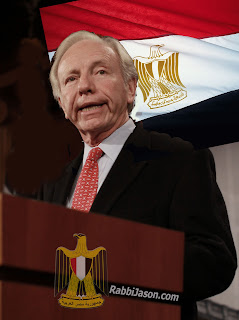 Joe Lieberman: Thank you for joining me here today in Cairo. I know it’s only been a few weeks since my press conference where I announced  I’ll retire from the Senate and not seek re-election. However, I have a major announcement to make yet again. Hosni Mubarak, the president of Egypt, has appointed me Foreign Minister over this country.

CNN Reporter: Mr. Lieberman, when will you begin?

Joe Lieberman: The appointment is effective today… it’s immediate in light of the chaos that currently plagues Egypt. I will be the second in command. And no Jewish man has ever held such a position of power in Egypt.

Fox Reporter: No, that’s not quite right either Mr. Lieberman.

Joe Lieberman: Well, anyway, there’s a lot of work to be done. I’d like to thank the Pharoah, er, I mean the President for his faith in me. You know when he called me on the phone to ask me to come down here, he said he never dreamed that the political situation could get so bad. But I told him that he had in fact dreamed that it would get this bad. I keep telling him that.

AP Reporter: What will be your first order of business to calm the masses who are rioting in the street?

Joe Lieberman: I came up with this great idea to stockpile food because you just never know. I’ve been in pits before and I think that in time we can get these people to start building. Thank you very much for your time today and God Bless Egypt!