For me, there is something mystical about approaching the Kotel — the Western Wall in Jerusalem. While this remnant wasn’t even one of the walls of the Temple (it was a surrounding wall), I recognize how full those stones are with the history of the Jewish people.

However, for many Jews today approaching the Kotel and praying there is like, well, sort of like talking to a wall. The area has become so enmeshed in political turmoil that there are discussions among some colleagues of mine to simply omit the Kotel on tours of Jerusalem. While the Southern Wall has been excavated and turned into a beautiful plaza (thanks to the late Bill Davidson, the Detroit philanthropist) where the progressive movements of Judaism are entitled to hold prayer services, it still lacks the prominence of the Kotel itself. 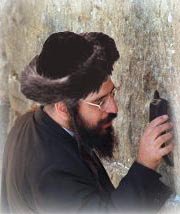 It was just announced that a “solution” has been proposed and accepted to respond to the complaint by women worshipers at the Kotel that they are unable to look over into the men’s section. Ynetnews.com reports, “The Western Wall Heritage Foundation management has decided to replace the existing partition in the Western Wall plaza, which separates the women and men’s praying sections, because it does not allow the women worshipers to easily look over to the men’s section. The foundation received many requests by women who frequent the Wall, claiming that during special celebrations held at the Kotel, such as bar mitzvahs, they are finding it difficult to watch the events through the partition.”

One proposed solution was to use one-way mirrors along the partition so the women could see into the men’s section, but not the other way around. This idea was nixed when the rabbis at the Western Wall Heritage Foundation discovered that one-way mirrors lose their effectiveness when they are exposed to the sun, and become visible from both sides.

Perhaps we should recall what Professor Yeshayahu Leibowitz, the Orthodox scientist and philosopher, wrote about the Kotel. In a scathing letter to Ha’aretz regarding the Western Wall becoming an act of idolotry with people praying to stones and pushing notes through the cracks, Leibowitz wrote: “Here is my proposal. The square in front of the Kotel should be revamped as the largest discotheque in the State of Israel, named the Divine Disco. This will satisfy everybody.” Ha’aretz printed his letter under the title “DisKotel” (From Tom Segev’s book 1967).