On the final day of the AIPAC Policy Conference in Washington, thousands of conference attendees descend on Capitol Hill to lobby members of Congress on issues important to the State of Israel. A few years ago I joined other pro-Israel Michiganders and lobbied Representative Dave Camp. The congressman wasn’t available to meet with us and left an ill-prepared staffer to answer our questions and try to assure us of his boss’s support of the Jewish State. Since Dave Camp represents the 4th Congressional District of Michigan (an area pretty far north of where I live), I didn’t think I’d find myself lobbying him on any other issues in the future. And I surely never thought I’d lobby him on the issue of an agunah — the case of a Jewish woman whose ex-husband refuses to grant her a get (a Jewish bill of divorce). 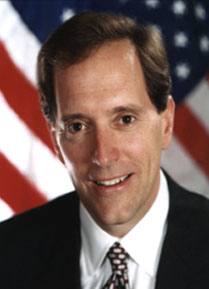 Rep. Dave Camp becomes the chairman of House Ways and Means Committee tomorrow taking over from Rep. Sandy Levin, and The New York Times reports that there is already controversy surrounding his office. Aharon Friedman, a 34-year-old tax counsel for the Republicans on the House Ways and Means Committee is an Orthodox Jew who is refusing to give his wife, Tamar Epstein, 27, a get.

The NY Times says that Friedman “finds himself scrutinized in the Jewish press, condemned by important rabbis, and attacked in a YouTube video showing about 200 people protesting outside his Silver Spring, Md., apartment on Dec. 19…The Friedman case has become emblematic of a torturous issue in which only a husband can ‘give’ a get. While Jewish communities have historically pressured obstinate husbands to give gets, this was a very rare case of seeking to shame the husband in the secular world.”

One rabbi wrote to the House Ways and Means Committee asking that he lean on Aharon Friedman to grant the Jewish divorce. The couple has been civilly divorced since April and share custody of their daughter, but they are still married according to Jewish law. Without the get neither one of them is permitted to remarry within the faith. Tamar Friedman is considered an agunah, or chained woman until Aharon presents her with a get.

I implore Representative Dave Camp to compel Aharon Friedman, his staff member, to do the ethical thing and grant his wife a Jewish bill of divorce. I’m sure that Rep. Camp wants everyone who works with him to be of moral character. On his first day as the chairman of this important committee tomorrow, I hope Dave Camp will take Aharon Goldstein aside and tell him what he needs to do to “right this wrong.” This matter has nothing to do with the Committee on Ways and Means or the 4th District of Michigan, but it has a lot to do with character and hopefully the leadership of the 112th Congress will make that a top priority.

As Rabbi Shmuel Herzfeld told The New York Times, “I don’t think the Messiah can come, as long as there is one agunah in the world.”