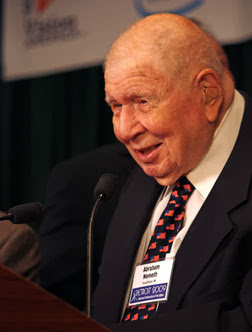 END_OF_DOCUMENT_TOKEN_TO_BE_REPLACED
Today is Yom Hashoah, the annual day of remembrance for victims of the Holocaust. While it is still morning it has already been the most meaningful Yom Hashoah experience for me.I actually had a feeling that Yom Hashoah 2013 wouldn’t be like past experiences. On Thursday, February 7 of this year the Shoah hit me like never before. I was freezing cold as I stood over the ravine at Babi Yar in Ukraine with two dozen of my rabbinic colleagues. Our shoes sunk into the snow as we stared out into the forest where 33,771 Jews were killed in a single operation between September 29–30, 1941.

So too was the case for me yesterday in the late afternoon. It was the music. My friend Hazzan Daniel Gross, the cantor at Adat Shalom Synagogue, is a gifted opera singer, composer and musicologist. The grandson of Holocaust survivors, Dan recognized there was a need for a Yom Hashoah liturgy so as part of his senior presentation in the H.L. Miller Cantorial School of the Jewish Theological Seminary he wrote one.