I jumped at the opportunity as soon as I received the press release from Jackie Headapohl, the editor at The Detroit Jewish News, asking me if I’d like to interview Dr. Michael Gray, the well-known plastic surgeon here in Michigan. The press release described a new social network called Pegged that Dr. Gray had created. It sounded as if this cosmetic surgeon was about to give Facebook a Face Lift. I spent an hour in Dr. Gray’s office learning about Pegged and the entire time I kept thinking that people will both love and hate this controversial social networking site. Here’s the front page article from this week’s Detroit Jewish News:

Dr. Michael Gray, a popular and successful plastic surgeon, spends his days transforming the way people look on the outside. But one thing he can’t do is fix who they are on the inside. That doesn’t mean he isn’t interested in trying though. 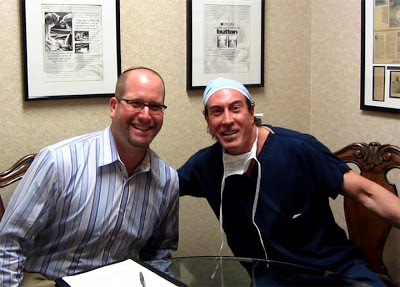 Gray, who is from New York, heads the Michigan Cosmetic Surgery Center and Skin Deep Spa in West Bloomfield. He wondered whether he could at least learn more about people’s character on the inside and create a social platform that would force them to try and change themselves internally. “The world is broken. What if we had a resource to assess who we meet? Would we be able to make better decisions about what we do in life? Would people be self-reflective after they get a review? Would they change?”

Gray felt the social networking sites already in existence, like Facebook, were not helpful because the users were in control of their profiles and able to create the type of persona they wanted to portray. So Gray began to envision a social networking site that would promote greater self-awareness and help people become better. What he came up with will no doubt be met with mixed reactions.

Pegged (pegged.com) will be controversial. The networking site (a mobile app is in production and will be released soon) will be a painful reality for many people. All social networking sites currently allow users to create their own profile, but in an interesting twist on the idea of social network profile creation, Pegged allows someone else to create a person’s profile. If you don’t like the waitress at the restaurant you can “peg” her by creating an account and detailing why she missed the mark. If a former friend is spreading rumors about you, you’ll have the opportunity to publicly call them out on their transgression. On the other end, the site will be beneficial for those looking to hire or date someone with more accurate data available for background checks. 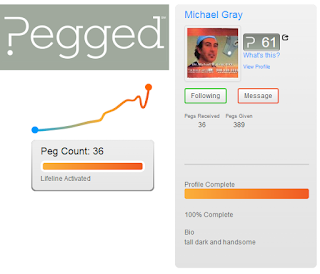 “When I hire staff for my practice every candidate looks great on their resume and in their initial interview,” Gray explained. “It usually takes about six months for their true colors to show. I just don’t have time for that so I want to be able to look someone up and immediately understand what type of person they really are.”

Gray believes the “opinion-built profile” through the assessment of others will be a tool that could allow Pegged to ultimately make humanity better. While the process won’t be without pain, he thinks it will be a path to insight. “The web and mobile app will be entertaining and fun, but at its core, the intention is to bring people into accountability for their interactions with others, and to offer them opportunities for self-reflection and growth.”

Through the comments and ratings made by others on a profile, Pegged follows people in their daily lives of social interaction and assigns them a “humanity score.” Over time, a graph will be produced showing the ups and downs (positives and negatives) of the quality of that person’s interactions chronologically in their lifetime. Gray believes this graph will provide users with valuable information about whether or not to date, hire, work for, or join a group with another person. Individuals will rate and review each other anonymously which will no doubt be one of the more controversial aspects of the site.

Concerned about bullying, Gray insists that there are many safe-guards built into the system so that no one is being rated based on religion, gender, race, age, or sexual orientation, and there is always the opportunity to respond to any comment. Gray won’t get into the way in which Pegged will prevent bullying, but says it will be similar to the measures Facebook implements to keep hate speech and abuse off their site. In an effort to resolve conflict between two parties, Gray is hoping to add a basis for mediation on the site.

The most controversial element of this platform is that even if a person chooses to live anonymously and social-media-free, unless one avoids people all together, someone will eventually join him or her to the website. “You can live like an ostrich with your head in the sand and pretend Pegged doesn’t exist, or you can participate and maintain some control through responding to posts about you,” Gray says. “Of course you will get people who lie, or who are haters, but in the long run, I believe that if you’re a good person, it’s going to pan out.”

Dr. Michael Gray is known for helping people improve their external image, but in this new endeavor he might have created the technology to help people do their own surgery on their character. Perhaps Pegged will be a tool to better help individuals prepare for the process of repentance on Yom Kippur.